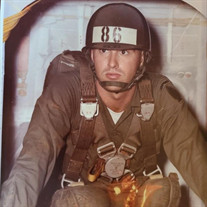 Victor Paul Rigoni, age 62 of Portage, IN passed away peacefully at his home on Saturday, May 29, 2021 in the care of his daughter Brittany following his battle with esophageal cancer. He was born on August 1, 1958 in Chicago, IL to John Sr. and Petronella (Proncktis) Rigoni. Victor is survived by his parents, John Sr. and Petronella Rigoni; three daughters, Tiffany (Chris) Hislope, Krystal Rigoni, Brittany (Michael Poti) Rigoni; two brothers, John Rigoni, Jr., Paul "Bruce" Rigoni; two sisters, Laura (Jim) Stefanisin, Lisa (Jeff) Martello; two granddaughters, Brooke Hislope, Nora Hislope; three grandsons, Kaysen Good, Benjamin Hislope, Jayden Chism; He was a longtime companion of LaShanda Crawl and step-father to KaSean, Makayla, and Sharon Earley and a loving second father to Priscilla Budkis. He was preceded in death by his beloved dog, Max. Victor was a United States Army Veteran and served from 1979 to 1985 as a Paratrooper, Medic, and Green Beret. He retired from his position as Supervisor with the C.T.A. following 26 years of service. Victor was a lifelong Chicago Blackhawks and White Sox fan and enjoyed watching the games on his back deck with his brother, Paul and puppy, Piper. Following retirement he became an avid gardener and enjoyed growing a variety of hot peppers and other vegetables in his self-built greenhouse. Victor was a single father to Tiffany, Krystal and Brittany and raised them on his own. He was a loving father, son, brother, grandfather, uncle and friend. His last advice to his son in law was "be nice to everyone". The family would like to thank the nurses and staff of Dunes Hospice for giving Victor the ability to live his last days at home and to those who donated to make his last weeks at home comfortable. Funeral service will be held on Friday, June 4, 2021 at 11:00 am at Edmonds & Evans Funeral Home Portage Chapel, 6941 Central Ave., Portage, IN 46368. Burial will follow at Heritage Cemetery, Portage, IN. Visitation will be held on Thursday, June 3, 2021 from 2:00 pm until 8:00 pm at the funeral home. Memorial donations in Victor's honor may be made to the Esophageal Cancer Awareness at www.ecaware.org/give/donate.

Victor Paul Rigoni, age 62 of Portage, IN passed away peacefully at his home on Saturday, May 29, 2021 in the care of his daughter Brittany following his battle with esophageal cancer. He was born on August 1, 1958 in Chicago, IL to John Sr.... View Obituary & Service Information

The family of Victor Paul Rigoni created this Life Tributes page to make it easy to share your memories.

Victor Paul Rigoni, age 62 of Portage, IN passed away peacefully...

Send flowers to the Rigoni family.