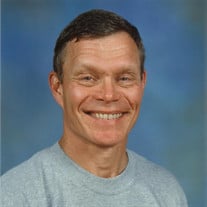 Tom "Coach Lev" Levandoski Thomas Edward Levandoski died peacefully at home Thursday, August 26, 2021 in Valparaiso, Indiana after battling cancer for over four years. He was born in 1949 in LaPorte, Indiana to Edward and Dorothy (Bode) Levandoski. On August 5, 1988, in Valparaiso, he married Kathy (McKibben) Levandoski who survives him. He is also survived by his brothers, Bill and Bob (Cheryl) both of LaPorte; five nephews Kellin Lambirth of Lafayette, David (Bethany) McKibben of Tucson, Jason (Jaymee) McKibben of Tucson, Eric McKibben of Tucson, Payton Holub of LaPorte; one niece Maddie McKibben of LaPorte IN; two brothers-in-law Dave (Christina) McKibben of Sahuarita and Dan (Carrie) McKibben of LaPorte; his mother-in-law Thelma McKibben of Valparaiso. Tom was preceded in death by his parents, his father-in-law and several aunts, uncles and cousins. A 1968 LaPorte High School graduate, Tom later graduated from Purdue University in 1971 with a degree in English and a minor in Physical Education. Tom taught English and then Physical Education at Portage High School from 1971-2007 where he also coached varsity baseball, served as assistant wrestling coach, and helped the cross country team with their summer camp. In Tom's honor, the Portage Cross Country team opened their recent meet with a special song that Tom helped create while working with the team years ago. A memorial service will be held on Thursday, September 2, 2021 at 4:00 pm at St. Peter Lutheran Church, 6540 Central Ave, Portage, IN 46368. A memorial visitation will be from 2:00 pm until the time of service at the church. The family of Tom Levandoski kindly requests that in lieu of flowers, you direct donations to St. Peter Lutheran Church, 6540 Central Ave, Portage, IN 46368. Tom served his church in many ways, including donating his time mowing the church's lawn for nearly 40 years.

The family of Thomas Edward Levandoski created this Life Tributes page to make it easy to share your memories.

Send flowers to the Levandoski family.