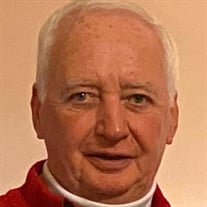 Terry Allen Hufford, age 74, passed away on November 27th, 2021 in his Portage, Indiana home surrounded by his loving family after a short battle with cancer. He was born in Hammond, Indiana, on September 15, 1947, to Dorothy Hufford and the late Albert (Bob) Hufford. He was an Andrean High School Graduate, class of 1965. He was drafted to the Army in 1969, and served in Fort Leonard Wood, Missouri, until 1971 when he returned home with his wife Sandra to raise a family. He worked at Bethlehem Steel and DLZ Construction for decades before finding his true home as the Executive Director of the Portage Chamber of Commerce. He retired from the Chamber in 2015 after having worked since the age of 14. Terry was an active member of Nativity of our Savior Parish where he served as a Catechist, Lector, Serra Club Member, Parish Council Chairperson and Chairperson of the annual festival before joining St. Francis Parish in Lake Station where he found a new church home. Terry has a strong devotion to his community giving of his time and talent to so many organizations. He had a love for the Portage Schools serving on the School Board for over 23 years. He served on the Portage Economic Development Commission as a Board Member. Terry was a member of the Rotary Club, served as a Board Member and Past President of the Portage Township Education Foundation and as a board member of the United Way of Porter County. He was Chairperson of the Portage Relay for Life supporting the American Cancer Society and took pride in bringing the community together for various fundraising opportunities. In his retirement, Terry enjoyed his Chicago Blackhawks Season Tickets, traveling with his family, enjoying his yardwork, and staying connected to his many friends throughout the community and across the country. He especially enjoyed cheering on his grandchildren in all their endeavors and spending each day enjoying time with the love of his life. Terry is survived by his wife, Sandra Hufford; Children, Scott (Beth) Hufford, Jennifer Goshen, Jackie Gentry, Jessica (Jeff) Niebel; Grandchildren, Zachary Goshen, Tyler Hufford, Trevor Hufford, Bryce Hufford, Blake Hufford, Gavin Niebel, Hannah Niebel, and Ashlyn Gentry; Mother, Dorothy Hufford; Sisters Holly (George) Jones, Becky (Phil) Vechey; and many beloved nieces, nephews, cousins, and lifelong friends. Terry was preceded in death by his Father, Albert (Bob) Hufford and brother Guy Hufford. A funeral Mass will take place at St. Francis Xavier Parish in Lake Station with Father David Kime and Father Jim Wozniak officiating on Wednesday, December 1, 2021 at 10:00 a.m. A memorial visitation will take place at Edmonds and Evans Funeral Home 6941 Central Avenue in Portage from 1 to 7 p.m. on Tuesday, November 30th. To honor and support the Portage community and its schools, about which Terry cared deeply, a fund has been established at the Porter County Community Foundation. In lieu of flowers, memorials may be made to the Terry Hufford Memorial Fund for Education, c/o PCCF, 1401 Calumet Avenue, Valparaiso 46383 or https://www.pccf.gives/terryhuffordmemorial.

Terry Allen Hufford, age 74, passed away on November 27th, 2021 in his Portage, Indiana home surrounded by his loving family after a short battle with cancer. He was born in Hammond, Indiana, on September 15, 1947, to Dorothy Hufford and the... View Obituary & Service Information

The family of Terry A. Hufford created this Life Tributes page to make it easy to share your memories.

Send flowers to the Hufford family.