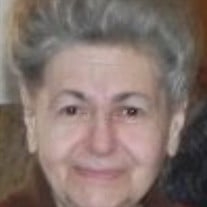 Stella Buckwalter (nee Klimis) The Lord Jesus called Stella to His heavenly home on Friday, November 27, 2020. Stella was born in Gary, IN on November 10, 1929 to Nick and Aphrodite Klimis and was a lifelong resident of Northwest Indiana. She... View Obituary & Service Information

The family of Stella Buckwalter created this Life Tributes page to make it easy to share your memories.

Send flowers to the Buckwalter family.