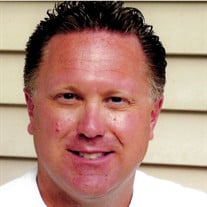 Scott Robert Rosene, age 50, of Portage, IN passed away on Saturday, November 7, 2020. He was born on November 12, 1969 in Davenport, IA to Robert and Nadine (Johnson) Rosene. Scott is survived by his wife, Dawn Rosene; daughter, Alyssa Barango; son-in-law, Anthony Barango; son, Austin Keen; granddaughter, Clarke Keen; niece and nephew, Ayana and Omarion Minfield; Goddaughter, Kristin Wolfe (Thomas); sister, Kristine Bryan; mother Nadine Rosene and several aunts, uncles and cousins. He was preceded in death by his father, Robert Rosene. Scott lived out his dream being a pilot. In 2002, he started his career in aviation and was a pilot for Talon Air until 2020. His records showed that he was at the top of his career. Scott has a four-year degree from Augusta in Sioux Falls, SD with a double major in aviation and psychology. Scott and Dawn met in 2008. He taught her how to ride motorcycles and it became their summertime passion. When they weren’t riding motorcycles, Scott like pushing his limits with fast cars. He hardly missed any local car shows. Scott and Dawn have two dogs: Mya and Malakai. Scott enjoyed taking the dogs wherever he could. You always knew he was pulling in when the music was booming. He enjoyed listening to almost anything. When Scott wasn’t busy, he spent his down time researching the latest technology (usually Apple). Any room lit up when Scott walked in. People were always attracted to his sense of humor and laid back personality. Our family has gained many friends from being a social butterfly. Visitation will be held on Friday, November 13, 2020 from 4:00 pm until 8:00 pm at Edmonds & Evans Funeral Home, Portage Chapel, 6941 Central Avenue, Portage, IN 46368. Funeral Service will be held on Saturday, November 14, 2020 at 11:00 am at the funeral home. Burial will follow at Heritage Cemetery in Portage, IN. Memorial donations may be made to Dunes Hospice. Online condolences may be made to the family at www.ee-fh.com

Scott Robert Rosene, age 50, of Portage, IN passed away on Saturday, November 7, 2020. He was born on November 12, 1969 in Davenport, IA to Robert and Nadine (Johnson) Rosene. Scott is survived by his wife, Dawn Rosene; daughter, Alyssa Barango;... View Obituary & Service Information

The family of Scott Robert Rosene created this Life Tributes page to make it easy to share your memories.

Scott Robert Rosene, age 50, of Portage, IN passed away on Saturday,...

Send flowers to the Rosene family.