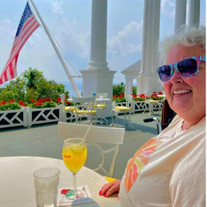 With profound sadness, the family of Sandy Ann Mitchell share the passing of their loving and adored mom on January 9, 2022 at the age of 73. Sandy was preceded in death by; her parents, Kenneth and Olive Ure; brother, Clare Stimson; brother, Norris Ure; brother, John Ure; loving husband, Robert (Bob) Mitchell; and grandson, Miles Mitchell. She is survived by; son, Shane Mitchell (Sherri); daughter, Julie Mitchell (Dave); daughter, Linsay Mitchell; grandson, Robert (Bobby) Mitchell; grandson William (Billy) Mitchell; and beloved pets, Hank Dawg and Tange. Much of Sandy’s young life was spent in Houghton, Michigan, where her father owned and operated a small hotel. Just before her teenage years, her father took a job opportunity and the family moved to Chesterton, Indiana, where they settled into the Morgan Park area. When she was 16, she met the love of her life, and future husband, Bob Mitchell. Together they had 3 children. In 1978 they began Bob Mitchell Landscaping. They worked as a team, pouring every ounce of energy into growing a successful business, while still making sure to sit down to a home-cooked family dinner at 5 pm every evening. In the mid 1980s, they expanded the business to include storage units, and later The Factory building, in downtown Chesterton. This allowed them to take more time for themselves and they began spending winters in the Florida Everglades in their RV. They quickly formed bonds and, along with Willy Dawg, then Sam Dawg, and finally Hank Dawg, they enjoyed 20 years of winters with the same group of friends “down at the swamp.” They spent their days riding the motorcycle or taking the convertible to the farmer’s market. They had fish fries, clubhouse parties, hot dog cook-offs and afternoon socials. They played bingo, cards and Mahjong. Sandy accomplished much and had many hobbies. She was a past Honored Queen with Job’s Daughters. She belonged to the First United Methodist Church and took much pride in her mission trip to an orphanage in Costa Rica. Her kids were shocked she didn’t come home with 10 new brothers and sisters for them and realized the adoption laws were the only thing that stopped her. She completed a college course in Master Gardening. She found her 15 minutes of fame when she appeared on all the local news channels regarding a bad case of water she received, inspiring her hilariously infamous quote, “it’s ok, but it’s not ok”. She had an unmatched love for Disney, especially Mickey. She could find any character in the park and manage to get a picture with them. She was on a first-name basis with Snow White, once yelling, “Yoo-hoo! Snow!” in the Easter parade and immediately being met back with a smile and wave through the massive crowd. She danced in the streets with Baloo bear. One of her favorite trips was taking her grandsons, “The Golden Boys,” as well as her son and favorite daughter-in-law, “Sherri Poppins,” to experience the magic. She loved Disney cruises with her BFF, as well. She looked forward to her weekly card dates with her gal pals and enjoyed years of raking in everything from cash to turkeys at bingo. She loved all her pets and found comfort in the grief of losing her husband with the addition of her cat, Tange. Sandy loved life. She was beautiful, inside and out. She was smart, loving, funny and had the best smile. Light and happiness shined from her eyes and followed her everywhere she went. She was innocent and sweet, but equally quick witted. She was the life of the party, once shocking everyone dancing on a bar, with Smirnoff shot girls, wearing a Sponge Bob T-shirt. She’d hit you with the most random knowledge when you’d least expect it, and you knew not to challenge her because she was always right. Her family is unsure if any of them know the actual rules to any game, as the rules always seemed to change based on their mom’s situation. She was strong and carried her family through dark times with grace and compassion, no matter the situation. There was no circumstance where she was unable to bring hope and comfort. She was reliable and loved with her whole heart, unconditionally. Of all the hats she wore, being a wife, mom, mother-in-law and Meme were her most cherished, and she was a natural. She was loved by everyone who ever met her and brought a tremendous amount of good to others. She was a bright soul, in a sometimes-dark world. Her loving family will all be forever grateful for the time they had with her, the people they became through her teachings, and the wonderful lives they’ve lived because of her. She will be missed by her family and friends every moment, of every day, forever. Memorial Services will be held on Saturday, January 22, 2022 at 4:00 pm at Edmonds & Evans Funeral Home, 517 Broadway, Chesterton, IN 46304. A Memorial Visitation will be held on Saturday, January 22, 2022 from 2:00 pm until time of at 4:00 pm. Online condolences to the family may be made at ee-fh.com.

With profound sadness, the family of Sandy Ann Mitchell share the passing of their loving and adored mom on January 9, 2022 at the age of 73. Sandy was preceded in death by; her parents, Kenneth and Olive Ure; brother, Clare Stimson; brother,... View Obituary & Service Information

The family of Sandy Ann Mitchell created this Life Tributes page to make it easy to share your memories.

With profound sadness, the family of Sandy Ann Mitchell share...

Send flowers to the Mitchell family.