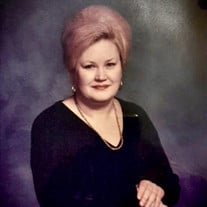 Ruby Lorraine Brown Bradford, age 82 of, Memphis, Tennessee passed away on October 18, 2021 in Las Vegas, Nevada after a brief illness. She was born in Valparaiso, Indiana to Donovan and Ruby Brown, she was the first of two children. She attended Portage High School where she played the piccolo in the marching band. Soon after graduation, she learned the fun of a big city and frequently drove to Chicago with her younger sister to enjoy all that the Windy City had to offer. After marrying and giving birth to three children, she followed her husband's career to San Diego, California and later settled in Memphis, which became her home for over 40 years. Lorraine was always generous with her time, be it attending her children's sporting events, volunteering at Methodist Hospital of Memphis, or visiting on behalf of her church. Raised in the Methodist faith, she found a new place of worship in Christ United Methodist Church in the 1970's when she became a single parent and the church's Positive Christian Singles class provided her fellowship and life long friends. She was a lover of the arts and would frequent the Dixon Art Gallery, the Memphis Botanical Gardens, and the Memphis Wind Symphony concerts. Lorraine always found a way to have adventurous fun, be it a trip to The Peabody to see the ducks, a visit to the Pavilion at St. Jude, or a plane ride to visit her many family members scattered around the US. Lorraine is survived by her daughters, Kim (Jay) Wriggins of Las Vegas, Nevada and Sue (Alex) Trobaugh of Los Angeles; son, Bob Bradford of Texas; "daughter-in-love", Tina Bradford of Burbank, CA; 5 grandchildren, Kyle Bradford, Hayley Bradford, and Christopher Bradford of Burbank,CA, Nicholas Trobaugh of Los Angeles, CA, Bradley Trobaugh who is currently serving in the US Navy overseas; Sister, Ginger (Bob) Krudup of Tucson, AZ. Additionally she leaves behind beloved cousins, life long friends and neighbors who helped her to live a happy, independent life in Memphis for so many years. Visitation will be held at Edmonds & Evans Funeral Home Portage Chapel, 6941 Central Avenue, Portage, IN 46368, on Saturday, October 30, 2021 from 10:00 am until 11:00 am, with Funeral services starting at 11:00 am. Burial to immediately follow at McCool Cemetery in Portage.

Ruby Lorraine Brown Bradford, age 82 of, Memphis, Tennessee passed away on October 18, 2021 in Las Vegas, Nevada after a brief illness. She was born in Valparaiso, Indiana to Donovan and Ruby Brown, she was the first of two children. She attended... View Obituary & Service Information

The family of Ruby Lorraine Brown Bradford created this Life Tributes page to make it easy to share your memories.