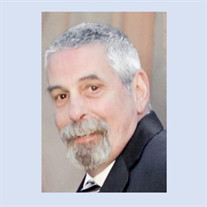 Robert Poparad, beloved husband, father, and grandfather, passed away peacefully in his home after a long battle with Lung cancer in the early morning hours of Friday, January 28th 2022. Bob is survived by his wife of 45 years, Maria (Maple); children Kelley (m. Michael) Killebrew, Bob (m. Amber Rosetti) Poparad, Christina (m. Kenneth) Albright, and Melanie (m. Jeremy) Kelly, multiple grandchildren; his sister, Marlene Knapp; loving in laws, cousins, nieces, nephews and Aunt Babe. He was preceded in death by his parents, Emil and Sylvia Poparad, and his brothers, Ray and Bill. Graduating from Chesterton High School in June of 1976, Bob and Maria married in November of 1976 and worked hard to build their life together. Bob was an active member of the Porter County Community for over 45 years working as a Pipefitter with Local 597 before becoming a small business owner; P&P Oil and Pinkerton Oil. Following in his father's footsteps, Bob served his community in multiple public offices including the Burns Harbor Town Council, Burns Harbor Park Board, Porter County Council, the BZA, and the Plan Commission. A man of genuine faith, Bob supported multiple charitable causes, faithfully attended church and sought out opportunities to help lift a neighbor in need. He was known for his love of his work and how he cared deeply for his employees and the joy he experienced finding and working on old large military vehicles. Above all, however, Bob loved his family and friends fiercely. He will be missed dearly. The family invites all who wish to celebrate Bob's life to a viewing on Tuesday, February 1st, from 4 pm to 8 pm at CrossPointe Christian Church, 114 E. US Hwy 6, Valparaiso. The funeral will follow at CrossPointe on Wednesday, February 2nd at 10 am. Burial to follow at Chesterton Cemetery. In lieu of flowers, the family requests donations to your local Hospice Chapter or Wounded Warriors in honor of Bob and his heart for giving. Online condolence may be made to the family at www.ee-fh.com

Robert Poparad, beloved husband, father, and grandfather, passed away peacefully in his home after a long battle with Lung cancer in the early morning hours of Friday, January 28th 2022. Bob is survived by his wife of 45 years, Maria (Maple);... View Obituary & Service Information

The family of Robert "Bob" Poparad created this Life Tributes page to make it easy to share your memories.

Send flowers to the Poparad family.