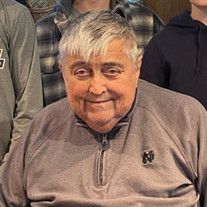 Robert John Laterzo, age 79 of Valparaiso passed away peacefully on April 26, 2022 surrounded by his loving family. He was born on October 31, 1942 in Gary, Indiana to Anthony and Anne (Petrovich) Laterzo who preceded him in death. He was a graduate of William A. Wirt High School’s “fabulous class of 1960” and Ball State University class of 1964. He attended the University of Arizona to pursue a Masters Degree in Business Administration. On September 10, 1966, he married Charlotte Mae (Beach) Laterzo who survives him. Robert and Charlotte were blessed with two children Marc Laterzo and Charlotte Gilhooly (Michael), and three amazing grandchildren who he was so proud of: Giancarlo Laterzo, Matthew Gilhooly and Nicholas Gilhooly. He is also survived by his two brothers, Rocco Laterzo (Kathleen) and Anthony Laterzo (Robin) along with beloved nieces Delisa Laterzo and Anastasia Laterzo and nephews Rocco Laterzo, and Christopher Laterzo. He cherished the fond memories of his recently departed nephew Anthony RV Laterzo. Robert was a loving father, son and brother and would do anything for his family. He was a hard and dedicated worker. His first jobs were at his parent’s restaurants, Tony’s Restaurant and Lounge in Gary and the BK Root Beer Stand in Hobart. After graduation, he worked as a management trainee at US Steel, followed by a long successful career in sales beginning at Oakite for 10 years before settling into his position at Quaker Chemical, selling chemicals/rolling oils to Northwest Indiana Steel Mills. He remained with Quaker for 30 years and retired in 2004. Robert was known for his many passions which included his love of music, singing Karaoke, boating in his “go fast boat” the “Cabo Carrerra” on Lake Michigan, playing handball and skiing. He was a die- hard Chicago Bears and IU basketball fan. In his retirement years, he enjoyed going out for a good cigar and conversation with his buddies at the Golden Leaf Cigar Shop. He loved to travel and despite his illness was recently blessed to be able to take a trip with his family to Cabo San Lucas, one of his favorite destinations. Memorial Visitation will be held on Friday, May 6th, 2022 from 1:00 PM until the time of Memorial Service at 4:00 PM at Edmonds and Evans Funeral Home, 517 Broadway, Chesterton, IN 46304. In lieu of flowers, the family requests donations be made to The Caring Place at https://thecaringplace.harnessapp.com. Online condolences may be left to the family at www.ee-fh.com.

Robert John Laterzo, age 79 of Valparaiso passed away peacefully on April 26, 2022 surrounded by his loving family. He was born on October 31, 1942 in Gary, Indiana to Anthony and Anne (Petrovich) Laterzo who preceded him in death. He was... View Obituary & Service Information

The family of Robert J. Laterzo created this Life Tributes page to make it easy to share your memories.

Send flowers to the Laterzo family.