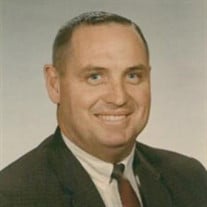 Robert "Bob" P. Kerns (Doc), age 89, of Valparaiso, IN passed away on Sunday, November 15, 2020. He was born on January 11, 1931 in Valparaiso, IN to Paul Lewis and Oletha Mable (Sands) Kerns. Bob played college football at Valparaiso University, where he earned a Bachelor Degree in Education. After graduation he served in the Armed Forces from 1953-1955, he was stationed in Germany and worked as an office clerk. When he returned home he married the love of his life, Marie Edman, on August 22, 1955 at Liberty Bible Church, where he was a charter member. He served as Sunday School Superintendent, a Deacon, and was on other numerous committees. He and his wife, Marie, loved cooking and catering for many large events. He completed his Masters Degree in Education at Indiana University. He also took classes in Athletic Training. He worked at Portage High School from 1956 until he retired in 1990. During these years at Portage he started by teaching math and being an assistance football coach and Jr. high basketball coach. In the early 1970’s he became one of the first high school athletic trainers in Indiana which led to his induction into the Indiana Football Hall of Fame. In 1988 he served as one of the Athletic Trainers for the Indiana All-Star football game. He also served for over five years as an NATABOC practical test examiner. After Bob retired from teaching, he and Marie owned and operated Wild Birds Unlimited in Valparaiso for seven years. Bob is survived by his beloved wife of 65 years, Marie Kerns; children, Cheryll (Dennis) Gamauf, Randy (Denise) Kerns, James (Amy) Kerns and Karen Montuori; grandchildren, Joshua (Shannon) Johnston, Lindsay (Jim) Green, Michael Johnston, Jessica (Rocco) Calipari, Christopher (Amanda) Kerns, Cassandra Kerns, Christine (Brennen) Hvezda, Ashley (Sean) Antell Jr, Shelina (Ryan) Samanas, Josiah Ketterman, Elizabeth (John) Maddox and James Ketterman; and 18 great grandchildren. Visitation will be held on Saturday, November 21, 2020 from 9:00 am until 11:00 am at Liberty Bible Church, 824 N. Calumet Rd., Chesterton, IN 46304. Funeral Service will begin at 11:00 am at the church with Pastor Darrell Crots officiating. Burial will follow services at Graceland Cemetery in Valparaiso, IN. Edmonds & Evans Funeral Home of Chesterton, IN entrusted with arrangements. Online condolences may be made to the family at www.ee-fh.com.

The family of Robert Kerns created this Life Tributes page to make it easy to share your memories.

Send flowers to the Kerns family.