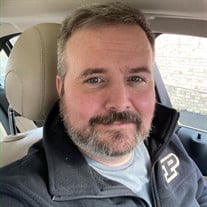 Robert E. Belshaw Jr. passed away on Thursday, December 16, 2021, after a valiant fight in his battle with COVID. He was 47 years old. Robert was born on July 7, 1974, in Hobart, Indiana to Robert and Cassandra (Padlo) Belshaw. He attended Purdue University where he held a double Bachelors Degree in Political Science and Business. After graduation, he spent the next 22 years working at the Gary Railway. Robert’s three children Ashlee, Robert, and Andrew were his pride and joy. He was a generous and loving father who always put his family first. As a dedicated and caring person, he was always doing whatever was asked of him and much more. Whether it was hospital stays or wrestling meets, Robert was there to fill every want and need for his children. Robert was a man of many talents, as an avid drummer he would use any opportunity to hone his drumming skills. While acting as an amateur comedian, he was quick to use his unique approach to brighten any day or break up any awkward moment. In typical Robert fashion, he would often practice his impromptu song making skills by making up parodies about his children. In addition to his daughter, Ashlee Smithers; two sons, Robert J. Belshaw and Andrew Belshaw, friend and mother of his children, Dena Belshaw, Robert is survived by his parents, Robert E. Belshaw Sr. and Cassandra Belshaw; his sisters, Connie (Greg) Prohl, Mandi (Steve) Rosenbaum, best friend, cousin and inappropriate sidekick, Sean Padlo, as well as many other nieces, nephews, cousins, and friends. He will be fondly remembered and dearly missed. Funeral services will be held on Monday, December 27, 2021, at 7:00 pm at Edmonds & Evans Funeral Home, 6941 Central Ave., Portage, IN 46368. Visitation will be held on Monday, December 27, 2021 from 5:00 pm until the time of service at 7:00 pm at the funeral home. The family requests that masks and facial coverings be worn by all in attendance. Online condolences may be made to the family at www.ee-fh.com. In lieu of flowers please make a donation to Robert's family in care of Dena Belshaw. Services may be viewed at https://webcast.funeralvue.com/events/viewer/65774

Robert E. Belshaw Jr. passed away on Thursday, December 16, 2021, after a valiant fight in his battle with COVID. He was 47 years old. Robert was born on July 7, 1974, in Hobart, Indiana to Robert and Cassandra (Padlo) Belshaw. He attended... View Obituary & Service Information

The family of Robert E. Belshaw Jr. created this Life Tributes page to make it easy to share your memories.

Send flowers to the Belshaw family.