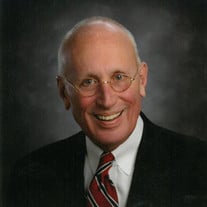 On January 15, 2022, Richard Roy Peterson passed away at the age of 75. Richard was a devoted husband, an incredible father and grandfather, and a cherished friend. Those lucky enough to know him called him a multitude of names: Dick, Rich, Pete, Dog, and Ricardo to name a few. Richard never knew a stranger, and always knew how to make people feel special and important. He was a master of combining his wit, intelligence, compassion, and generosity to help his family, friends, and strangers through any situation. These attributes were evident in his tremendous success in both his personal and professional lives. Richard was born on February 11,1946, in Pittsburgh, Pennsylvania to Roy and Marie Peterson. He was a miracle baby and Roy and Marie’s only child. Richard grew up in Pittsburgh and attended St. Teresa’s Catholic School and North Catholic High School. He played baseball, basketball, and football growing up, with a strong passion for football in high school. He was the center for his team and won the city championship in 1963. He was so honored to be inducted into North Catholic’s Trojan Hall of Fame in 2017 for his many contributions and lifetime work. He attended Youngstown State University on a football scholarship and graduated in 1968 with a degree in Business Administration and Marketing. He was a member of Sigma Alpha Epsilon Fraternity. His younger years solidified his lifelong love of all things Pittsburgh and YSU, football, and sales management. Richard had many accomplishments as an adult. He often spoke of building a legacy of leadership and service. He started as a salesman for IBM, which spurred a successful career in sales management which included Senior Vice President of A. B. DICK Company, Executive Vice President of Konica (Minolta), President of Amcom Pittsburgh, and Senior Vice President of Global Imaging Systems (Xerox). He also served as the Senior Vice President of Jimmy Valvano’s “V Foundation for Cancer Research” after his own battle with cancer. He served on various boards including Easter Seals of Western and Central Pennsylvania, North Catholic High School Board of Trustees, The Trustees Society of Youngstown State University, YSU’s 12th Man Club and Pittsburgh Urban Planning. He added golf as his passion as an adult, and was an avid golfer and worked hard to win several club championships. Richard’s greatest accomplishment was the building of his family legacy, which began with his 54 year loving marriage to Janet (Barger) formerly of Youngstown, OH. Their love and dedication have provided a strong foundation for their children and grandchildren. Richard is survived by his adored wife, Janet of Chesterton, IN, daughters, Kristin (Donald Bedock) of Lakeville, IN, and Kerry (Louis Leone), of Valparaiso, IN. Seven grandchildren, Chad Bari (Rachael), Andrew Bari (Kimberly De Vincent), Quinn Bari (Raina Rampoldt), A.J. Bedock, Erik Bedock, Gillian Leone, Pete Leone and 2 great-grandchildren, Stella and Margot Bari. Calling hours will be held at Edmonds & Evans Funeral Home at 517 Broadway, Chesterton, Indiana, 46304, on Friday, January 21, 2022 from 3:00 pm to 7:00 pm. The funeral mass will be held at Saint Patrick Catholic Church at 638 N. Calumet Road, Chesterton, IN 46304 on Saturday, January 22, 2022 at 10:00 am. The family requests memorial gifts be made to the Richard R. Peterson Family Scholarship at the Youngstown State University Foundation, 655 Wick Avenue, Youngstown, Ohio 44502. You can also give online at ysufoundation.org by clicking “Give Now” and following the prompts. Online condolences to the family may be made at ee-fh.com.

On January 15, 2022, Richard Roy Peterson passed away at the age of 75. Richard was a devoted husband, an incredible father and grandfather, and a cherished friend. Those lucky enough to know him called him a multitude of names: Dick, Rich,... View Obituary & Service Information

The family of Richard R. Peterson created this Life Tributes page to make it easy to share your memories.

Send flowers to the Peterson family.