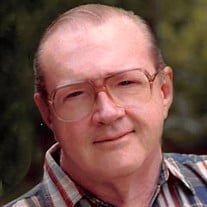 Richard L. Henderson, 77, of Michigan City, passed away Nov 23, 2020 of complications from COVID-19. He was born Oct 21, 1943 in Three Rivers, Michigan, marrying Dee Anne Henderson on June 6, 1964. They raised their family in Chesterton and Westville. Dee Anne and daughter, Michele Henderson, preceded him in death. On August 31, 1996, he married Darlene (Pliske) Henderson, and moved to Michigan City. He is survived by his wife, Darlene; daughter, Jeanette (Gene) Burrows; grandchildren, Nichole Scarlett, Kenneth Matthews and Ricky Matthews; step daughter, Ann Thorvik; sister, Karen Sliwinski and countless friends. Rich was a proud US Air Force veteran and a retired toolmaker at REXAM (American National Can). He was an avid fisherman, woodworker/machinist/craftsman, and lover of vintage car auctions. When not watching football, he often could be found listening to the oldies while tinkering in his workshop. A generous helper and guide to those trying to create or repair, Rich appeared reserved and frugal, rather than flashy, but added warmth and great humor to every room he entered. In recognition of infection prevention guidelines and social distancing concerns, a private memorial without visitation will be held in Chesterton and private interment will be next to his first wife, Dee Anne, in Chesterton. In lieu of flowers, the family asks that memorial donations be made to St. Jude Research Hospital, 501 St. Jude Place, Memphis, TN 38105 in Rich's memory. Edmonds & Evans Funeral Home is entrusted with arrangements.

Richard L. Henderson, 77, of Michigan City, passed away Nov 23, 2020 of complications from COVID-19. He was born Oct 21, 1943 in Three Rivers, Michigan, marrying Dee Anne Henderson on June 6, 1964. They raised their family in Chesterton and... View Obituary & Service Information

The family of Richard Henderson created this Life Tributes page to make it easy to share your memories.

Send flowers to the Henderson family.