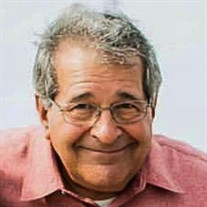 Richard “Rich” A. Guerra, 73, of Westville, IN passed away suddenly on April 30, 2022. When he wasn’t helping as first mate or fishing for kings with his son Matthew, he was doting on his four grandkids or watching the Cubs’ play with his wife and high school sweetheart, Meg. Rich was born on March 28, 1949 in Bethlehem, PA, to Adolph and Mary Guerra who preceded him in death. He graduated in 1967 from Bethlehem Catholic High School, married Marguerite Talbot in 1969 and received a bachelor’s in social welfare from Kutztown University in 1972. A third-generation steelworker, Rich spent a thirty-year career with Bethlehem Steel, retiring as an environmental engineer. Rich was also predeceased by a twin brother and sister before his birth, his beloved sister Lois Guerra, and many aunts, uncles and cousins. He is survived by his wife of 51 years Meg (Talbot) Guerra; daughters Michele (Tyler) Hasty of Middleville, MI and Danielle (Ryan) Mains of Huntley, IL; and son Matt Guerra of Michigan City, IN. He also spoiled his grandchildren Jackson (12), Reece (11), Jude (10), and Lucy (6). His viewing will take place at Edmonds & Evans Funeral Home, 517 Broadway, Chesterton, IN 46304, on Thursday, May 5, 2022 from 4:00-6:00 pm with a funeral ceremony to begin at 6:00 pm. Rich was an avid outdoorsman who spent much of his time at the Michigan City Pier and Marina as a proud member of the Hoosier Coho Club teaching others how to fish for his favorite – king salmon. In lieu of flowers, please consider making a donation in Rich’s name to the Hoosier Coho Club at https://www.hoosiercohoclub.org/index.php?option=com_content&view=article&id=54. Online condolences may be made to the family at www.ee-fh.com

The family of Rich Guerra created this Life Tributes page to make it easy to share your memories.

Richard “Rich” A. Guerra, 73, of Westville, IN passed away suddenly...

Send flowers to the Guerra family.