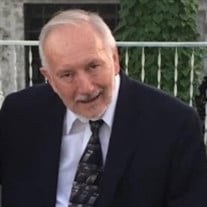 Peter Sutcliffe, age 75 of Portage, IN passed away on Thursday, November 26, 2020. Peter was born on July 28, 1945 in Burnley, England. He was the youngest son of Fredrick and Eva (Walkden) Sutcliffe. He attended the Townley Grammar School in Burnley and graduated in 1961. He immediately went into the printing business and took an apprenticeship with a local print shop in his hometown. Upon completion of the apprenticeship, he stayed and worked at the print shop as a Printing Pressman. While working at the shop he met his soon to be loving wife, Margaret (Harring) Sutcliffe. The two exchanged vows and became officially married on July 27, 1968. He worked at the print shop for six years until coming to the United States of America in 1973. He lived in Whiting, IN with his wife and daughter, Lisa, and started a job in Chicago as a Printing Pressman. After a number of years working in Chicago, he decided to form his own print shop called P & H Printing Inc. Years later, he retired due to his struggles with Parkinson’s Disease, which was something that he battled for the last 30 years of his life. After retiring from the printing business, he moved to Portage, IN with his wife so that he could be closer to his daughter and grandchildren. Peter is survived by his loving wife, Margaret; daughter, Lisa (Sutcliffe) (Duane) Purnick; and their children, Ryan and Amanda who lived with him in Portage; brother, Derek (Barbara) Sutcliffe; and their children, Neil, Nigel and Kay who live in Burnley, England. Due to current situations, services will be held at a later date in person and virtually. In lieu of flowers, please make any donations in Peter’s honor to the Foodbank of Northwest Indiana, 6490 Broadway, Merrillville, IN 46410, call (219) 980-1777, or donate on their website at foodbanknwi.org. Edmonds & Evans Funeral Home was entrusted with arrangements.

Peter Sutcliffe, age 75 of Portage, IN passed away on Thursday, November 26, 2020. Peter was born on July 28, 1945 in Burnley, England. He was the youngest son of Fredrick and Eva (Walkden) Sutcliffe. He attended the Townley Grammar School... View Obituary & Service Information

The family of Peter Sutcliffe created this Life Tributes page to make it easy to share your memories.

Peter Sutcliffe, age 75 of Portage, IN passed away on Thursday,...

Send flowers to the Sutcliffe family.