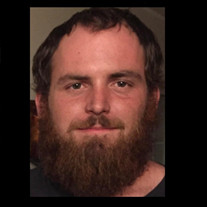 Nathan Blount was welcomed into the world on September 30, 1988 at Womak Army Community Hospital in Fort Bragg, NC by his parents Denise and Rich, and his siblings Christina and Richie. Soon after his arrival, the family moved home to Michigan City, IN, and Nathan enjoyed the rest of his days in the area. As a child, Nathan was funny and mischievous. The entire family loved swimming at Lakeland Park, Saturday morning bowling, racing cars with Grandpa Roger, sleepovers with Grandpa Tom and the kids, preparing demolition derby cars, and being outdoors. With two working parents, Nathan and his siblings were self-sufficient at a young age, and by 10 years old they were learning to build houses alongside their Dad on the weekends. From that point on, Nathan wanted tools for Christmas, developed a love for fixing things, and was his Dad’s right hand man. After high school graduation, Nathan met his neighbor, Leah, and she became the love of his life. By the time Nathan was 20, their daughter Isabella was born, and over the next decade she was joined by sisters; Layla, Atheena and Gabriela and the family pets; Sweet Pea, Bandit, Tom, Shadow, and Smokey. Nathan’s love for his family was unwavering, and he touched their lives as well as the lives of many friends with his wonderful soul. He could make anyone smile, gave the best hugs where you felt safe in his arms, and he was always willing to help anyone. To care for his family, Nathan worked tirelessly building homes with his Dad, and later becoming an independent truck driver. At work Nathan was calm, steady, diligent and so conscientious. People were always ahead of profits in Nathan’s world, and he drove carefully even to the point of staying home in bad weather rather than risking an accident. Despite those precautions, Nathan lost his life in a traffic collision on his way home from work on March 13, 2021. Visitation for Nathan will be held Saturday, March 20 from 4-6 PM at Edmonds & Evans Funeral Home, 517 Broadway, Chesterton, IN, with a service immediately following. In lieu of flowers, donations may be made to his family, in Nathan Blount’s memory, at Horizon Bank, 423 Roosevelt, Chesterton, IN. Nathan would have been humbled by the outpouring of support for his family, and would want you to hold your loved ones extra close tonight, just as he would have done.

Nathan Blount was welcomed into the world on September 30, 1988 at Womak Army Community Hospital in Fort Bragg, NC by his parents Denise and Rich, and his siblings Christina and Richie. Soon after his arrival, the family moved home to Michigan... View Obituary & Service Information

The family of Nathan Blount created this Life Tributes page to make it easy to share your memories.

Send flowers to the Blount family.