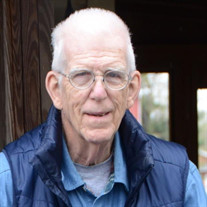 Mark “Jerry” Ruge passed away October 13,2021 surrounded by his family. Jerry has been married for 64 years to Dawn Ruge with whom they raised eight children who survive: Kimberly Shaw, Pamela (Edward) Strudas, Gwen Lane, Mox Ruge (Haley Ross), Dawn (Jorge) Hernandez, Suzanne (Mike) Mahaffey, Jackie (Mike) Ruge-Perkins and Jason (Megan Wallen) Ruge. He leaves behind 18 Grandchildren, 9 Great Grandchildren and 1 Great-Great Grandchild. He loved his family more than anything and had a special unique nickname for each Grandchild. He is also survived by his siblings James Ruge (Roy Krizek), Thomas Ruge, and Kathleen Scott. He was preceded in death by his parents Mox G. Ruge and Ann F. Ruge. Most know Jerry as a faithful man who devoted his life to God, Family and Community - frequently seen in town in his signature Cowboy Hat. He was a Lector at St Patrick’s Church. He was a member of Chesterton Lions Club since 1987, past president and recipient of many awards, where his passion for their cause of assisting vison impaired and the blind led him on 19 missions to Mexico for this purpose. He also devoted his time to working with Westville prisoners who volunteered in the Lions Vision program. He was active in Rebuilding Together Duneland for many years serving as House Captain. He assisted with many other local organizations including the Westchester Neighbors Food Pantry and was a recipient of the Duneland Chamber’s Golden Achievement Award in 2015. Jerry was an avid trapper and outdoorsman teaching his children and grandchildren how to hunt, fish and build a campfire. He loved playing his concertina or harmonica, dancing around the campfire at family gatherings which were frequent and cherished. He was a machinist at E J & E Railroad then a millwright at National Can Company where he served as a union representative until he became a partner in his wife’s Dawn’s Catering business. They were a community favorite caterer and served thousands of meals in this and surrounding communities. Mass of Christian Burial will be held on Monday, October 18, 2021 at 10:00 am at St. Patrick Catholic Church, 638 N. Calumet Rd., Chesterton, IN 46304. Visitation will be held on Sunday, October 17, 2021 from 2:00 pm until 6:00 pm at Edmonds and Evans Funeral Home, 517 Broadway, Chesterton, IN. Online condolences may be made to the family at www.ee-fh.com Jerry was the most giving, generous person. He supported many organizations and the family asks that donations be made in his name to either St. Patrick’s Church or School or the Chesterton Lions Club.

The family of Mark "Jerry" Ruge created this Life Tributes page to make it easy to share your memories.

Send flowers to the Ruge family.