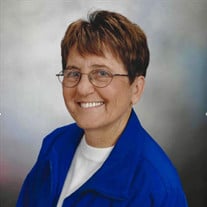 Marilyn Joyce Laszlo went to be with her Lord and Savior on September 9, 2021. She was 88. She was born on July 20, 1933, in Gary, Indiana. She was the daughter of Martin and Lois (Jewell) Laszlo, who preceded her in death. Marilyn was raised on the Laszlo Family Farm in Liberty Township, and she loved helping her dad in the fields. In 1951, she graduated from Liberty Township High School. Starting in 1949, her sophomore year in high school, Marilyn began to play on the championship softball team of the Valparaiso Strongbow Queens and continued with the team through 1960. In 1959, she received her Bachelor's Degree from Bryan College in History and her Master's Degree in Education from Indiana University in 1961. In 1986, Marilyn was awarded the Alumni of the Year Award from Bryan College, and in 2003 Bryan College bestowed their honorary Doctorate of Letters upon her. Marilyn started her professional career as a high school teacher in Michigan and Indiana. Soon after beginning her teaching career, she answered the call of God to become a missionary. In 1965, Marilyn joined Wycliffe Bible Translators and studied linguistics at the Summer Institute of Linguistics at the University of Oklahoma. Wycliffe chose Marilyn to be a Bible Translator, and in 1968, Marilyn and her translation partner arrived in Hauna Village. Hauna is located deep in the jungles on the East Sepik River in Papua New Guinea. Marilyn, along with her original translation partner, had to take the unwritten language of Hauna, which is the Sepik Iwam language, and create a written language. Developing the language entailed creating an alphabet while also learning how to speak the language. Unfortunately, Marilyn's original translation partner left after five years for another assignment. Marilyn was then joined by her sister Shirley Killosky. As Marilyn translated the Bible, Shirley taught the people of Hauna to read and write their language. Together, Marilyn and Shirley also did medical work and trained the people of Hauna to operate a local school, store, medical clinic, and church. Marilyn completed the Bible translation in 1990, and the Bible was dedicated in 1991. One of Marilyn's most memorable moments during this time was bringing a team of six men from Hauna for a speaking tour throughout the United States. They even spoke at a Billy Graham Crusade. Marilyn retired as a translator in 1991 and became a national speaker for Wycliffe through 2003. In 2003, Marilyn started Laszlo Mission League. She continued as a national speaker and raised money for special projects around the world and in Papua New Guinea. In 2012, Marilyn retired from speaking due to the advancement of Alzheimer's disease. In 2013, Marilyn returned to Hauna to say her final goodbyes to the people of Hauna. During her lifetime, Marilyn recorded four record albums, with her singing partner Beverly Entz, at Pinebrook Recording Studios (owned by Gaither Music Group and now called Gaither Studios) in Alexandria, Indiana. In addition, she had three books written about her work in Hauna: Miracle in Cannibal Country; Mission Possible; and A is for Airstrip. She also had three movies created about her work: Mountain of Light, Come By Here (Angel Award winner), and Return to Hauna (Angel Award winner). Marilyn was passionate about: her work in Hauna, the importance of missionary work, helping young people discover their career path, her family, her Hungarian heritage, and her upbringing in Liberty Township. Today, there are thousands of missionaries on the mission field worldwide because of the impact of hearing Marilyn speak, reading her books, or watching her films. She was a true inspiration. Marilyn’s work is continuing in the Sepik River region through her organization Laszlo Mission League. Marilyn is survived by her sisters Shirley Killosky of Garden City, ID and Fay (Lou) Popp of Chesterton and her nieces and nephews, James Killosky of Porter; Lisa (Jim) Holm of Boise, ID; Don Killosky of Garden City, ID; Lorelei Weimer of Chesterton; Robert (Carla) Laszlo of Issaquah, WA; Tracy Popp of Key West, FL.; Martin (Brandi) Miller of Murrells Inlet, SC; Carrie (Steve) Cieliesz of Valparaiso; Jody (Tom Barrineau) Miller of Murrells Inlet, SC; Suzanne (Michael) Olson of Knoxville, TN; and Leo (Natalie) Miller of Chesterton. She was preceded in death by her parents, sister Carolyn Miller Prosser, and niece Michele Weimer Tribole. The family wants to extend a special thank you to Glenna Amburgey, Karen Garza, and Audrey Swieczkowski for taking such wonderful, loving care of Marilyn during her final years. A Celebration of Life service will be held on October 5, 2021, at 6:00 p.m. at Liberty Bible Church at 824 North Calumet, Chesterton, Indiana. Topher Philgreen will officiate. The service will also be livestreamed. Visit www.laszlomissionleague.com for information on the livestream. Donations in memory of Marilyn can be made to Laszlo Mission League for the Marilyn Laszlo Legacy Fund. This fund will endow a perpetual scholarship to women pursuing mission work or Bible translation. You can donate at www.laszlomissionleague.com.

Marilyn Joyce Laszlo went to be with her Lord and Savior on September 9, 2021. She was 88. She was born on July 20, 1933, in Gary, Indiana. She was the daughter of Martin and Lois (Jewell) Laszlo, who preceded her in death. Marilyn was raised... View Obituary & Service Information

The family of Marilyn Joyce Laszlo created this Life Tributes page to make it easy to share your memories.

Marilyn Joyce Laszlo went to be with her Lord and Savior on September...

Send flowers to the Laszlo family.