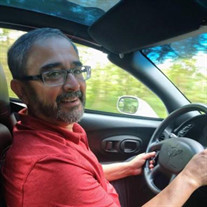 Manuel "Manny" Guardiola Jr., age 58 of Chesterton, IN passed away on Wednesday, March 31, 2021. He was born on August 30, 1962 in Nava, Coahuila, Mexico to Manuel and Julia (Fernandez) Guardiola. Manny is survived by his loving wife, Peggy Guardiola; sons, Kian (Amanda) Guardiola, Michael (Stephanie) Guardiola; daughter, Brianne (Zack) Sigman; brothers, Angel, Javier, Armando; sisters, Irma, Maria, Dora, Linda; brother-in-law, Sean; sisters-in-law, Shannon, Erin, Katie, Denise; grandchildren, Finnegan, Oliver, Delaney, Miles; numerous beloved nieces, nephews, and cousins. He was preceded in death by his father, Manuel Guardiola. Manny was born on August 30,1962 in Nava, Mexico to Manuel and Julia Guardiola. He grew up with 3 brothers and 4 sisters in Gary, Indiana. In 1980 he graduated from Lew Wallace High School where he met the love of his life Peggy. They were happily married for 39 years. They raised three amazing children, “adopted children” and four grandchildren for which he was so proud. Manny was a friend to all and cherished his relationships with his family and friends. He had a soft spot for the kids in his life, always willing to break the rules for them. Manny was determined and the hardest working man around. He retired from Strack & Van Til after 38 years of service. He then started his second career and found his passion in Epic Limo with his brother-in law Brian. This came as no surprise due to his lifelong love of all things to do with cars. Funeral services will be private. Memorials may be given in Manny’s honor to the American Heart Association, 7272 Greenville Ave. Dallas, TX 75231. Arrangements entrusted to Edmonds & Evans Funeral and Cremation Services.

Manuel "Manny" Guardiola Jr., age 58 of Chesterton, IN passed away on Wednesday, March 31, 2021. He was born on August 30, 1962 in Nava, Coahuila, Mexico to Manuel and Julia (Fernandez) Guardiola. Manny is survived by his loving wife, Peggy... View Obituary & Service Information

The family of Manuel "Manny" Guardiola Jr. created this Life Tributes page to make it easy to share your memories.

Send flowers to the Guardiola family.