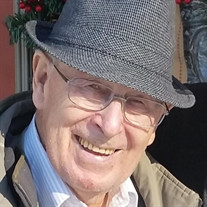 On February 3, 2022, a long road traveled had come to its end. Our father, Loren "Larry", "Lace" Field was no longer "still on the map"- a comical euphemism he would use when asked how he was doing. For nearly 94 years Dad negotiated the twists, turns, ups and downs of the road we call life. And what a road it was...... Dad was born on March 3, 1928 to parents Merrill and Anna Field at St. Catherine Hospital in the Harbor section of East Chicago. The second of two sons, he spent seemingly endless hours partaking in and observing what can only be described as the Greatest Show on Earth! He detailed growing up in the Harbor as a magical combination of the Little Rascals, Elliott Ness' Untouchables, and a Barnum & Bailey Circus. "Never a dull moment!" he would declare. His vivid memory would allow him to paint intricate stories of colorful characters like "Babe" Kolina, "Blue" Wayman, "Jughead" Brown, "Cookie" Vann, "Lado" Bulatovich, Frankie Lore and "Schultzy". All frequent actors in his stories and true life-long friends. As time moved along, a chance meeting with a beautiful young music student at the bus stop would change his life forever. The student was one Eleanore Banfy of the Calumet area of East Chicago. She was carrying sheet music and the clever young man offered that he could sing whatever she could play. (Well done, sir!) A romance bloomed and after Lace's service in WW II, they were married at Holy Trinity Hungarian Church in Calumet. A 56-year marriage resulted in five children who survive- Laura (Thomas Day) Fitzhugh, Kenneth (Trisha) Field, Steven (Maria) Field, Janice (Alex) Kosanovich and David (Christine) Field. A vital part of their marriage and family life was the consistent and sincere practicing of their Catholic faith. Even to the day before his passing, Dad recited his daily rosary. His devotion to his faith and, especially, the Blessed Mother, was unwavering. He never failed to encourage faith and its importance to his children and all his grandchildren- Lauren (Kevin) Dado, Ryan Fitzhugh, Kyle and Cole Kosanovich, Grace and Carley Field, Johnny Field and Vincent Field, and great-grandchildren Eleanor, Vivian and Bill Dado. Dad's incredible ability to speak to anybody was in part due to his kind soul, his sweet smile, abundant humor and sincerity. Aside from working at Inland Steel for 20 years, he somehow was able to sell World Book Encyclopedia sets door-to-door, even with the advent of the Internet! At one point, his drive and enthusiasm for wanting to help kids learn resulted in a national sales award- while selling in "underprivileged" East Chicago. Now that's something!! Lace often enjoyed relaxing with a Bears, Cubs, Sox, or Bulls game, but nothing compared to Notre Dame Football. Rarely would he venture out without donning an ND hat or T-shirt first. But in spite of the many great athletes that starred for these teams, his true "heros" were Mother Theresa and Pope John Paul II. Loren was preceded in death by his parents; his loving wife of 56 years Eleanore; and his brother David Field. Though Dad is no longer "on the map", his love of family, God, Country and of Notre Dame live on. Dad did not die, he lived!!! In celebration of his life, feel free to join the family at a visitation on Tuesday, February 8th, 2022 from 4:00pm until 8:00pm CST at Edmonds & Evans Funeral Home Portage Chapel, 6941 Central Avenue, Portage, IN 46368. A Mass of Christian burial will be held on Wednesday, February 9, 2022 at 10:00am CST at Nativity of Our Savior Catholic Church, 2949 Willowcreek Road, Portage, IN 46368. Loren will be laid to rest privately at a later date at St. John- St. Joseph Catholic Cemetery, Hammond, IN. In lieu of flowers, donations can be made to St. Joseph's Carmelite Home, East Chicago, IN.

On February 3, 2022, a long road traveled had come to its end. Our father, Loren "Larry", "Lace" Field was no longer "still on the map"- a comical euphemism he would use when asked how he was doing. For nearly 94 years Dad negotiated the twists,... View Obituary & Service Information

The family of Loren "Larry" "Lace" Field created this Life Tributes page to make it easy to share your memories.

Send flowers to the Field family.