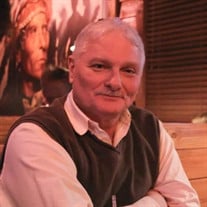 Jimmy Ray Stanley, age 71 of Portage, IN passed away on Monday, October 11, 2021 in Valparaiso, IN. He was born on January 17, 1950 in Palestine, TX to Carolyn (Scott) Stanley, later adopted by Ned Stanley. Jimmy is survived by his mother, Carolyn (Scott) Stanley; wife, Diana (Henderson) Stanley; children, Cariann (Art Rodriguez) Meyer, April (David) Strickley, Anthony (Monicca) Stanley, Lisa Hilton, James (Joan) Stanley, Desa (Robert) Stephenson, Ashlee (T. Jeremy) Klingensmith, Aimee (Kurtis) Lloyd; brothers, Reith Stanley, Jerry Valdetero, Gary Valdetero; sister, Janelle Underriner; 18 grandchildren and 4 great-grandchildren. He was preceded in death by his father, Ned Stanley; sisters, A. Carol Stanley, Naeta Price; birth father, Forrest G. Valdetero; sisters, Sharoyn Carty and Donna Valdetero. Jimmy worked as a Steelworker at USS Gary Works Midwest plant for 37 years. He married Diana on December 11, 1980 in Valparaiso, IN. After retiring in 2013, his dream was to travel and spend as much time with family as possible. For 45 years, he was a loving, devoted, and proud husband, father, and Papa. He was a devout Christian who attended Northwood Baptist Church, and later Bethel Portage/Hobart Campus. He loved the Lord and would witness to anyone he met. He was a strong, hard working, selfless man who lended a hand to anyone who was in need. In his spare time he enjoyed attending Gary Railcats baseball games, woodworking, landscaping, and craftsmanship of all kinds. Jimmy spent his life doing what he loved and supporting his family in any way he could. He loved watching his children and grandchildren excel in sports and pursuing their interests in life. He was his children and grandchildren’s biggest fan and you could find him most nights sitting front and center as he donned his rally caps and homemade noise makers. To say he will be missed is an understatement, for his absence leaves a void for all those who knew and loved him. Visitation will be held on Thursday, October 21st, 2021 from 4:00 pm to 8:00 pm at Edmonds & Evans Funeral Home, Portage Chapel, 6941 Central Ave., Portage, IN 46368. Funeral services will be held on Friday, October 22nd, 2021 at 10:00 am at the funeral home. Burial to take place at Heritage Cemetery. Online condolences may be made to the family at ee-fh.com

Jimmy Ray Stanley, age 71 of Portage, IN passed away on Monday, October 11, 2021 in Valparaiso, IN. He was born on January 17, 1950 in Palestine, TX to Carolyn (Scott) Stanley, later adopted by Ned Stanley. Jimmy is survived by his mother,... View Obituary & Service Information

The family of Jimmy Ray Stanley created this Life Tributes page to make it easy to share your memories.

Jimmy Ray Stanley, age 71 of Portage, IN passed away on Monday,...

Send flowers to the Stanley family.