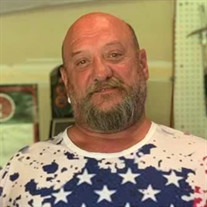 Jesse A. Pliske of Burns Harbor, Indiana passed away unexpectedly on Saturday, August 7, 2021. He was born in Valparaiso, Indiana on August 1, 1961 to Jesse A. and Geraldine M. (Carpenter) Pliske. Jesse just celebrated his retirement from Canadian National Railroad as a machinist on August 2nd after 41 years of service. He looked forward to his days filled with odd jobs around the house, helping family and friends and spending more time with his wife, children, grandchildren and his numerous friends. Jesse also loved spending time in Michigan at the Pliske family cabin over the years. He was an avid Cubs and Bears fan. He enjoyed golfing and was a great fisherman. Jesse was a wonderful teacher, willing to share his passion and knowledge with others wanting to learn how to fish, turn a wrench or whatever life lesson was in order. Jesse was a jack of all trades and always had a helping hand for anyone in need. He wasn’t afraid to speak his mind, which caused some trouble over the years but mostly resulted in heartfelt friendships. He is survived by his beloved family including his wife of 29 years, Tammy (Wallace) Pliske; his mother, Geraldine Pliske; children, Curtis (Michelle) Pliske, Garrett (Kelli Novak) Pliske and Jessie (Mike Staff) Pliske; grandchildren, Emily, Ella, Jameson, Skylar, Ian and baby boy Pliske due in December; brother, Ted (Kathy) Pliske; sisters, Lu Ann Jones and Beth Ann (Mark) Cinkoski; many nieces and nephews and numerous close friends, including Mike and Libby Stout. He was preceded in death by his father, Jesse A. Pliske Sr.; sister, Teri Lyn Pliske; mother-in-law, Sandy (Bradshaw) Hernandez and father-in-law, Dennis Wallace; brother-in-law, Donald Ehrick and sister-in-law, Cheryl Pliske. Funeral Service will be held on Saturday, August 14, 2021 at 11:00 am at Edmonds & Evans Funeral Home, 517 Broadway, Chesterton, Indiana with Pastor Scott Jones officiating. Burial will follow at Chesterton Cemetery. Visitation will take place on Friday, August 13 from 4:00 pm until 8:00 pm at the funeral home. The family encourages visitors to dress comfortably and wear their favorite sports team attire.

Jesse A. Pliske of Burns Harbor, Indiana passed away unexpectedly on Saturday, August 7, 2021. He was born in Valparaiso, Indiana on August 1, 1961 to Jesse A. and Geraldine M. (Carpenter) Pliske. Jesse just celebrated his retirement from Canadian... View Obituary & Service Information

The family of Jesse A. Pliske created this Life Tributes page to make it easy to share your memories.

Jesse A. Pliske of Burns Harbor, Indiana passed away unexpectedly...

Send flowers to the Pliske family.