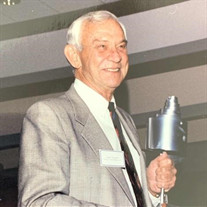 Jerry Murphy, age 91 of Chesterton, Indiana passed away on Wednesday, September 16, 2020. He was born to Marian and Newton Murphy on November 22, 1928. With his sisters, Mary Alice, Virginia, and Patricia, he was raised in Spencer, Iowa. Following his high school graduation, Jerry spent two years in the US Navy. He attended the University of Iowa on the GI Bill where he graduated with a degree in Political Science, a wife, and an obsession with the Hawkeyes and Big Ten sports that he’d carry with him throughout his life. Jerry spent two years working for the Studebaker Corporation and ten years in sales with US Steel in Pittsburgh and Baltimore. He joined the Feralloy Corporation, a steel processing company, as Vice President of the Eastern Division with plants in Baltimore and Wilmington, Delaware. He transferred to Chicago in 1968 as Vice President of the Midwest Division. In 1969-70 the company was acquired by German steel producer, Salzgitter Steelwich, part of a government holding company, Salzgitter AG. Jerry was appointed President and CEO where he served for 23 years. The company continued to expand through the 70s and 80s primarily with joint ventures in steel processing plants. Two more ventures developed on the Port of Indiana, Feralloy Processing with US Steel and Indiana Pickling and Processing with Signode Corporation and Bethlehem Steel. He also served as President of SZ Industrial Corporation, the American holding company for other companies in the Salzgitter AG group. When he retired, Jerry relocated from Winnetka, Illinois to Dune Acres, Indiana in 1995 and later organized the development of Chicago Cold Rolling LLC with the construction of a mini cold reduction plant on the Port of Indiana, a venture with Mill Equipment Corporation of Pittsburgh, PA and Bethlehem Steel. He resigned from CCR in the early 2000s to spend time traveling with his wife. They visited every continent including Antarctica in 2006. He was previously a member of the board of the German American Chamber of Commerce in Chicago and a longtime member of North Shore Country Club in Glenview, Illinois and Sand Creek Country Club in Chesterton, Indiana. He was an avid golf player and enjoyed spending time on any greens that would have him. Jerry had a long and full life. He dealt with different cultures and traveled around the world. He was an avid sports fan and the pains in his life mostly revolved around Chicago sports teams or Hawkeyes’ failures to win. What was most important to him were his wonderful family and his loving wife of 69 years. He is survived by his wife Anne Murphy, his daughters Kathy and Laura, his son Mike, and his grandchildren Maggie, Jack, Jake, Hudson, and Kyle. In passing he joins his daughter Sally, parents, his sisters. The family invites you to join them for a gathering at Edmonds & Evans Funeral Home, 517 Broadway, Chesterton, IN 46304 on Wednesday, September 23, 2020 from 2:00 pm until 3:00 pm. Services to honor Jerry Murphy’s life will follow at 3:00 pm. In lieu of flowers please make a donation to the charity of your choice. Online condolences to the family may be made at www.ee-fh.com.

Jerry Murphy, age 91 of Chesterton, Indiana passed away on Wednesday, September 16, 2020. He was born to Marian and Newton Murphy on November 22, 1928. With his sisters, Mary Alice, Virginia, and Patricia, he was raised in Spencer, Iowa. Following... View Obituary & Service Information

The family of Jerry Murphy created this Life Tributes page to make it easy to share your memories.

Jerry Murphy, age 91 of Chesterton, Indiana passed away on Wednesday,...

Send flowers to the Murphy family.