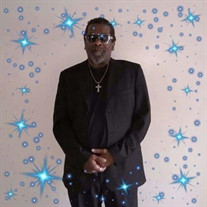 Jerome James Irving also known to everybody as “Bubba” age 54 of Portage, IN has been called back home as of Saturday, October 9th, 2021. He was born on May 24th, 1967 in Indianapolis, IN to Wayne Carter and Sondra Irving. Bubba is survived by his fiancé, Christina Ronk; two daughters, Briana Irving, Kasandra Irving (Jordi Santoya); two sons, Avery Villano, Bradley Wilson; granddaughter on the way, Paris Lynn Santoya-Irving; six sisters, Katina Hardiman, Denise Hardiman, Michelle King, Linda Singh, Amy Vela (Jesse Vela), Jennifer Green; three brothers, Brian Custin, Tracey Clark, Kenny Marshall; his adopted Mother, Janice King; father in law, Ray Ronk; and many nieces, nephews and extended family and friends. He was proceeded in death by his mother, Sondra Irving; adopted father, Dave King; sister Bernice King; brother, Little David King; brother in law, Lucky Ross; niece, Angel Harris; and mother in law, Debra Gaskell. Bubba was an inspirational, loving person. He loved his family and was strong willed. He was a great father and an inspiration to all that he came across. Bubba enjoyed making people laugh and was a fantastic cook. At a young age Bubba accepted Christ at Zion Baptist Church. His final wishes in life were to be kept the same as if he was still here with us. Always remember he may not be here in person, but he is here in spirit. May he rest in gangsta paradise. The family will be hosting a celebration of Bubba’s life at a later date. In lieu of flowers, memorial donations may be made to Christina Ronk or Briana Irving.

The family of Jerome James Irving created this Life Tributes page to make it easy to share your memories.

Jerome James Irving also known to everybody as “Bubba” age 54...

Send flowers to the Irving family.