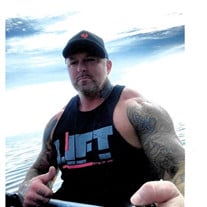 Jeffery A. Burriss, age 40 of Valparaiso, IN passed away on Monday, March 29, 2021 in Valparaiso, IN. He was born on August 31, 1980 in Munster, IN to Jeffery Burriss Sr. and Tyilla (Baldner) Costley. Jeffery is survived by his mother, Tyilla (Baldner) Costley; daughter, Dezerea Carothers; sister, Magen Burriss, grandson, Andre Carothers; uncle, Chris Baldner; grandfather, Pete Geller; nephews, Michael Cameren Kirk and Caylb Burriss and niece, Arayana Swelfer; furbabies, Vida and El Jefe and his shop family. He was preceded in death by father, Jeffery A. Burriss, Sr.; furbaby, Sproket; uncle, Ray Baldner and grandmother, Joan Geller. Jeff was a proud owner of InstInked Tattoo Studio in Portage, IN. Jeff was known for his goofy personality but mostly for his astonishing artwork he left on so many. He was a talented artist who pursued his dream of owning his own shop which he opened in August 2019. Jeff was one of the rarest kinds of friends you could ask for. He was genuine, had a heart of gold, yet didn't take any nonsense. He was honest and honesty comes with the truth that sometimes hurts but always had his best intentions within it. He was always busy but somehow knew when he had to be there for you. He was stubborn, focused, and goal driven but never selfish or ill intended. Jeff will be deeply missed by so many friends and family, no words can express what it means to lose him. Rest in Peace TAT2Jeff. Funeral Ceremony will be held on Monday, April 5, 2021 at 1:00 pm at Edmonds & Evans Funeral Home Portage Chapel, 6941 Central Avenue, Portage, IN 46368. Burial to take place at Heritage Cemetery. Visitation will be from 9:00 am until the time of service at 1:00 pm at the funeral home. Online condolences may be made to the family at www.ee-fh.com.

Jeffery A. Burriss, age 40 of Valparaiso, IN passed away on Monday, March 29, 2021 in Valparaiso, IN. He was born on August 31, 1980 in Munster, IN to Jeffery Burriss Sr. and Tyilla (Baldner) Costley. Jeffery is survived by his mother, Tyilla... View Obituary & Service Information

The family of Jeffery A. Burriss Jr. created this Life Tributes page to make it easy to share your memories.

Jeffery A. Burriss, age 40 of Valparaiso, IN passed away on Monday,...

Send flowers to the Burriss family.