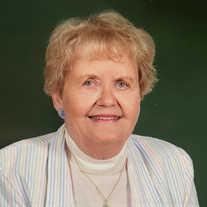 Janice Marie (McComas) Custer, age 90 of Chesterton, IN passed away on Wednesday, January 19, 2022. She was born on May 4, 1931 in Indianapolis, IN to Paul and Marie (Shaner) McComas. Janice is survived by son, Jeffrey (Robin) Custer; three daughters, Gayle (Mark) Dickinson, Marilyn (Pat) Custer-Mitchell, Diane (Tom) Hyatte; seven grandsons, Brad (Melissa) Custer, Chas (Morgan) Custer, Nathan Dickinson, Evan Dickinson, Joseph (Abby) Mitchell, Jackson Hyatte, Nicholas Hyatte; three granddaughters, Kelly Custer, Lena Hyatte, Renae Hyatte; three great grandsons, Tormund Custer, Corbin Custer, Finley Custer; sister in law, Laurie Custer; brother in law, Thurston (Valerie) Custer; and brother in law, Howard Wallace. She was preceded in death by her parents; sister, Marilyn Wallace; former spouse Dale Custer; brothers in law, Tom Custer and Alton Custer. Janice received her Bachelor's degree from Indiana University and Master's degree from Valparaiso University. She was a member of the IU Alumni Association. She was a member of Kappa Kappa Gamma Sorority and was active in the Kappa Kappa Gamma and Beta Gamma Upsilon Alumnae Associations. Janice retired from the Duneland School system where she worked for many years as a dedicated and active educator. She was an English and Media Teacher at CHS from 1969 to 1992. Janice was a member of the Duneland Teachers Association and served as president as well as negotiations chairman. She served the Duneland School Corporation as a School Board Member from 1997 to 2012 and was president for several terms. Janice was a Duneland Education Foundation Charter Member and recipient of the Educator of the Year Award in 2016. She was also a member of the Indiana State Teachers Association and the National Education Association. Janice was past-president of the Porter County Retired Teachers Association and was a member of the Board of Directors of the Indiana Retired Teachers Association. She was a member of the Chesterton Duneland Chamber of Commerce and received the Volunteer of the Year Award in 2013. Janice was a member and past-president of the Chesterton Women's Club. She was a member of the American Contract Bridge League achieving the rank of Silver Life Master. She was a recipient of the Athena Award in 1998. Janice was an active member of Chesterton First United Methodist Church and past-president of the Joy Circle. She was a volunteer and member of the Westchester Public Library and Chesterton Art Gallery. Janice received the Rotary Club Paul Harris Fellow Award in 2012. Due to rising COVID concerns and out of an abundance of caution for everyone's safety, services for Janice will be private. The family understands that many would like to be part of the celebration of her life. Therefore, the streaming broadcast of Janice's service may be viewed at https://webcast.funeralvue.com/events/viewer/67702 starting at 12:00 pm on Sunday, January 23, 2022. Please feel free to pay your respects and share memories of Janice with the family online at www.ee-fh.com. Arrangements made with Edmonds & Evans Funeral Home, Chesterton, IN. In lieu of flowers, memorial donations may be made to the National Fragile X Foundation, 1861 International Drive, Suite 200, McLean, VA 22102; the American Cancer Society; or the Duneland Education Foundation.

Janice Marie (McComas) Custer, age 90 of Chesterton, IN passed away on Wednesday, January 19, 2022. She was born on May 4, 1931 in Indianapolis, IN to Paul and Marie (Shaner) McComas. Janice is survived by son, Jeffrey (Robin) Custer; three... View Obituary & Service Information

The family of Janice Marie Custer created this Life Tributes page to make it easy to share your memories.

Send flowers to the Custer family.