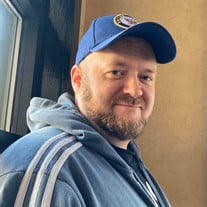 Jimmy was brought into this world on Thanksgiving Day 1983 at Dwight David Eisenhower Army Medical Center on Fort Gordon, Georgia. He spent his early life as an Army brat for two years at Fort Riley, Kansas followed by three years in Ansbach, West Germany. Upon returning stateside Jimmy went on to eat ice cream and watch fireworks on the South Lawn of The White House with his beloved sister Kristy. They watched Marine One land together and found a few eggs there during the Annual Easter Egg Roll as well! Jim attended elementary and High School in the Elgin, IL area before joining the United States Navy where he served as an Operations Specialist (Radar)from September 2003 to December 2007 He served his country with honor and distinction, first aboard the USS Seattle (AOE-3) based out of Norfolk, Virginia. There he spent the majority of his time at sea including a 9 month deployment to the Eastern Mediterranean Sea and the Persian Gulf supporting the Global War on Terrorism (GWoT). After the decommissioning of the USS Seattle, Jim attended a Navy school in Virginia Beach, Virginia before receiving orders to the USS McClusky (FFG-41) moored in San Diego, California. It was here Jim spent months using his skills on the radar in the South Pacific conducting narcotics interdiction. He and his team seized over 20 metric tons of illegal drugs destined for the streets of America.His exemplary service saved countless lives and prevented criminal activities on our shores. Upon discharge Jim attended Southern Illinois University where he pursued a degree in Political Science and Pre Law. In 2009 he began his long battle with mental illness and addiction to alcohol. That fight took him to Veteran's Administration medical centers in Leavenworth, Kansas, St. Louis, Missouri, Marion, Chicago, and North Chicago, Illinois. If it weren't for the dedicated medical professionals and fellow veterans at the VA Jim would have lost this battle much sooner. His dream was to find sobriety so he could help fellow veterans battle mental illness and addiction. Despite fighting extremely hard and trying every treatment (including electroconvulsive therapy ECT) Jim lost his battle in Chicago, Illinois on September 10, 2020. He was preceded in death by his mother, Patty Miller, and his grandparents Don and Patsy Miller. He is survived by his parents Jim and Heather Miller, the sister he adored, Kristy Miller and her fiancé Kevin Shelton, and his three youngest siblings who affectionately refer to him as "Brother Jimmy" - Mitchell, Fletcher and Paisley Miller. Jim was cremated and will be interred at Abraham Lincoln National Cemetery in Ellwood, Illinois at a later date. A Celebration of Life Open House is being held by his family on September 27, 2020 from 1pm to 4pm at Sage-Popovich's hangar at 5101 Airport Road, Gary, Indiana 46406. Family and friends are invited to tell a story, share a joke, and celebrate Jim's far too short life. In lieu of flowers, donations can be made to A Safe Haven Foundation http://www.asafehaven.org

Jimmy was brought into this world on Thanksgiving Day 1983 at Dwight David Eisenhower Army Medical Center on Fort Gordon, Georgia. He spent his early life as an Army brat for two years at Fort Riley, Kansas followed by three years in Ansbach,... View Obituary & Service Information

The family of James Patrick Miller Jr. created this Life Tributes page to make it easy to share your memories.

Jimmy was brought into this world on Thanksgiving Day 1983 at...

Send flowers to the Miller family.