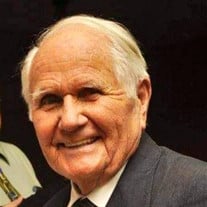 James "Jim" Anton Thorstad Sr., age 91, of Chesterton, IN passed away on Saturday, November 21, 2020 at his home surrounded by his loving family. He was born in Chicago, IL on May 30, 1929 to LaVerne and Lillian (Braendle) Thorstad. On July 14, 1951 in Chicago, Il he married Barbara Kelly, they were married 67 years until her passing on October 16, 2018. They moved their large family to Chesterton in 1967 from Arlington Heights, IL. They called Chesterton home and became beloved members of the community. Jim was a member of St. Patrick Catholic Church for many years; he served as a Eucharistic Minister, Lector and Religious Education Teacher. He was also on the Parish Council and volunteered with many activities at the church including the Cursillo Teams. Jim was a chemical engineer for Drew Chemical Corporation which later became Ashland Oil Company; retiring from there in 1996. He previously worked at Abbott Laboratories and Baxter Laboratories where he was actively involved with the development of the intravenous port system. He also worked as a Pharmaceutical Sales Representative for Parke Davis. During his career he received numerous awards and recognition for superior sales and outstanding leadership. Jim was a member of the Chesterton Lion's Club for over 50 years and was recently awarded the Melvin Jones Fellow Award. He was a member of the Knights of Columbus, 4th degree Knight. He was also a member of Sons of Norway. He was on the Gift of Water team to purify water in Haiti, he volunteered for six missions there. He volunteered at Sharing Meadows as a counselor for the residents and at the Annual Leprechaun Hunt. He and his wife, Barbara wintered 20 years in Palmetto, FL and traveled extensively with friends to Europe, Hawaii and enjoyed many cruises together. First and foremost his family was the most important part of his life. He enjoyed attending all of the activities of his children, grandchildren and great grandchildren. Jim was very outgoing and never met a stranger, he had a quick wit and great sense of humor. The family wishes to extend a special thank you to his caregiver, Ivan Gulenko and Harbor Light Hospice. He is survived by sons, James (Lauren) Thorstad, Jr. of Chesterton and John (Laura) Thorstad of Valparaiso; daughters, Janice (Daniel) Edquist of LaPorte, Kate “Kitty” Wallace of Valparaiso, Barbara (Phillip) Warwick of Melbourne, FL and Patricia Zosso of Chesterton; daughter-in-law, Kathleen (Bob) Hedge of Melbourne, FL; sister-in-law, Patricia Thorstad of Chicago and Patricia Connery of Schaumburg, IL; grandchildren, Julie Terhorst, Doug and Craig Hugus, Tim, Chris, Ben, Kelly, Nick, Nate and Kaitlin Edquist, Natalie Sutton, Tom and Drew Thorstad, Adam and Ryan Thorstad, David, William, Zachary and Robert Hedge, Elizabeth Murphy and Katherine and Sarah Warwick, Paul Wallace, Amelia Lasky, Jillian, Myles and Garrett Evans, Eric and Evan Thorstad and great grandchildren, Suzi, Lucy, Colin, Nora, Isaac, Alma, Gavin, Ella, Troy, Sam, Joey, Cora, Mia, Julia, Ethan, Alaina, Lucas, Alexzander, Atlas, Maximus, Cayden, Seton, AnnaLea, Kolbe, Olivia, Owen and Bayne and many many nieces and nephews. He was preceded in death by his parents; wife, Barbara Thorstad; son, Thomas P. Thorstad and daughter, Susan Hugus; and granddaughter, Lara Wallace; brother, Robert C. Thorstad; sisters-in-law, Mary Kelly, Virginia (James) Kindelin and Frances (Russell) Leist and brother-in-law, Joseph Connery. Due to current Covid restrictions the family will be holding a private visitation Friday, November 27, 2020 and private Mass of Christian Burial on Saturday, November 28, 2020 with Father Nathaniel Edquist officiating and Father Jon Plavcan concelebrating. Burial will take place at Chesterton Cemetery in Chesterton, IN. Edmonds & Evans Funeral Home is assisting the family with arrangements. A Memorial Mass and celebration of life will be planned for all of Jim's many friends and extended family and announced at a later date. Memorials may be made to The James and Barbara Thorstad Scholarship Fund at St. Patrick Catholic School, 640 N. Calumet Rd., Chesterton, IN 46304, Share Foundation With The Handicapped, Inc., P.O. Box 400, Rolling Prairie, IN 46371-0400 or Harbor Light Hospice. Online condolences may be made to the family at www.ee-fh.com. To view the service taking place on Friday, November 27, 2020 at 5pm use the following link: http://webcast.funeralvue.com/events/viewer/41449 To view the Mass of Christian Burial at St. Patrick Catholic Church on Saturday, November 29, 2020 at 10am use the following link: http://webcast.funeralvue.com/events/viewer/41450

James "Jim" Anton Thorstad Sr., age 91, of Chesterton, IN passed away on Saturday, November 21, 2020 at his home surrounded by his loving family. He was born in Chicago, IL on May 30, 1929 to LaVerne and Lillian (Braendle) Thorstad. On July... View Obituary & Service Information

The family of James "Jim" Anton Thorstad Sr. created this Life Tributes page to make it easy to share your memories.

Send flowers to the Thorstad family.