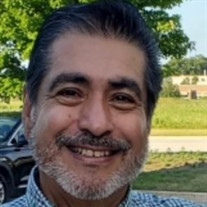 Eloy "Lucky" Casias Jr., age 70 of Portage, IN passed away on Tuesday, December 28, 2021 in Valparaiso, IN. He was born on July 1, 1951 in Hudson, WY to Eloy and Alice (Martinez) Casias. Lucky is survived by his wife of 30 years, Edie (Turcotte) Casias; sons, Michael W. (Debra) Casias, Jerad L. (Bethany) Casias; daughters, Kristie (Ryan) Dwinell, Brandy (Brian) Austin, Sarah (Mike) Szostek; granddaughters, Cheyenne (Benjamin) Flohr, Alaska Austin, Alexis Meadow Austin, Sierra Scales, Adessa Dwinell, Abigail Casias, Betsy Casias, Molly Szostek, Rian Dwinell; grandsons, Chandler Chasko, Elijah Scales, Drew Casias, Michael Owen Szostek; great-grandsons, Kristijan Flohr, Warren Curry; great-granddaughter, Tauren Flohr. He is survived by many siblings including: Frances (Peter) Mott, Gilbert Casias, Susan “Susie” Arner, David Casias, Anthony Casias, Doris Gonzales, Dennis Casias, Robert Casias and Lucille Marquez. He was preceded in death by his father, Eloy Casias, Sr.; mother, Alice Sanchez; sister, Sara Losea, and one grandson, Bodee Dwinell. Lucky was raised in the Wyoming State Children's Home alongside his many siblings. These formative years strengthened his work ethic and ensured he had a strong sense of independence. Lucky was a 1971 graduate of Kelly Walsh High School in Casper, WY where he was a multi-sport letterman competing in wrestling, cross-country, and basketball. Ultimately, Lucky found fulfilling and rewarding employment as a machinist at Amoco Refinery in Casper, WY where he worked for many years. When that refinery closed in 1991, he and his family relocated to Northwest Indiana. Lucky continued employment at the BP Refinery in Whiting, IN before retiring in 2008. Lucky’s retirement years were spent doing hobbies of his choosing, whether it was continual upgrades and improvements to his home or riding his Harley-Davidson. He wore out and upgraded across several motorcycles over the years as he went on cross-country rides and relished the feeling of freedom on the highways. However, the two most important things in his life were always his family and his faith. One of his most proud achievements was his graduation from Charis Bible College where he received his diploma and participated in a mission trip with his wife Edie to Nicaragua where they fed orphans and helped the homeless. A Memorial Service will be held on Monday, January 3, 2022 at 11:00am at Edmonds & Evans Funeral Home Portage Chapel, 6941 Central Ave., Portage, IN 46368 with Pastor Stephen Lehman officiating. A memorial visitation will be from 10:00am until the time of service at 11:00am. In lieu of flowers, memorial donations in Lucky's honor may be made to the organization of the donor's choice.

The family of Eloy "Lucky" Casias Jr. created this Life Tributes page to make it easy to share your memories.

Send flowers to the Casias family.