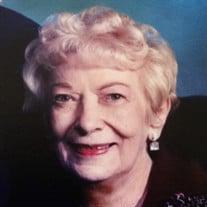 Ellajean Allard Taplin, 93, a retired real estate agent, former teacher and the widow of a senior Central Intelligence Agency operations officer, died peacefully on June 20, 2021 in Chesterton, IN. She was born in Phillipsburg, PA on July 23, 1927, an only child. Her father, John Arnold Allard, was a renowned educator in Moon Township, PA where an elementary school is named in his honor; her mother, Florence Kanour Allard, was a teacher and homemaker. Ellajean, or “EJ” as she was known, graduated from the University of Michigan in 1948. EJ met her future husband, Winn L. Taplin, in Ann Arbor. He served in the U.S. Marine Corps during the Korean War, earned a Ph.D in American History from Michigan and then joined the Central Intelligence Agency as an operations officer in the Clandestine Service. They were happily married for 67 years until Winn’s passing in 2016. EJ accompanied Winn on overseas tours to South Vietnam, Romania, Switzerland and Thailand. Bright, friendly and gracious, EJ was an invaluable, albeit informal and uncompensated, partner in his work. While overseas, EJ also taught fourth grade in Saigon and later, while living in Bangkok, she helped process refugees fleeing Communist oppression in Laos, Cambodia and Vietnam. Returning to the U.S., she earned a real estate license and greatly enjoyed remodeling her many homes. Painting was another of EJ’s lifelong passions: she won first place awards in art shows in Geneva, Switzerland and Fairfax, VA. After her husband retired in 1982, Ellajean and Winn relocated to Stowe, VT and then Sarasota, FL. In 2019, EJ moved to Storypoint in Chesterton, IN where she continued to paint, even as her eyesight was failing. She never missed a good party nor a good joke with her many friends and family. Ellajean is survived by her daughter, Leslie Taplin Baumann of Valparaiso, IN, and son-in-law Dean; her son, Mark Allard Taplin of Sarajevo, Bosnia and Herzegovina, and daughter-in-law Kathy Kavalec; her sister-in-law Claire Taplin of Southbury, CT; her husband’s niece Sandra Leonard; her grandchildren, John Baumann (and wife Melinda Lee), Benjamin Taplin, Samuel Taplin and Gwendolyn Taplin; and great grandchilden Penelope and Logan Baumann. Memorial contributions may be made to the Moon Area Education Foundation, which supports scholarships and educational upgrades at Moon Township Pennsylvania schools, at moonaef.org. Arrangement entrusted to Edmonds & Evans Funeral and Cremation Services. Online condolences to the family may be made at www.ee-fh.com.

Ellajean Allard Taplin, 93, a retired real estate agent, former teacher and the widow of a senior Central Intelligence Agency operations officer, died peacefully on June 20, 2021 in Chesterton, IN. She was born in Phillipsburg, PA on July 23,... View Obituary & Service Information

The family of Ellajean "EJ" Allard Taplin created this Life Tributes page to make it easy to share your memories.

Send flowers to the Taplin family.