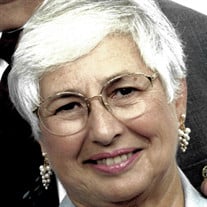 Eleanora “Ellie” Cecilia Justice (nee Seigel), age 89 of Portage, IN departed this life on Saturday, December 26, 2020 at Golden Living Center in Portage due to natural causes. Ellie was born in McKeesport, PA on August 1, 1931 to Edmund and Eleanora Seigel (Lewis) and graduated from Catholic Central High School in Steubenville, OH in 1949. She married Edward L. Justice, Jr. at St. Paul’s Catholic Church in Weirton, WV in 1950 and in 1951 became an Air Force wife when Ed enlisted. The family was stationed in several places during their time with the Air Force and the Korean War, Luke Air Force Base, AZ, Okinawa, and Chitose Air Base, Japan. At Luke Air Force Base Ellie gave birth to their first daughter, Loretta. While in Japan, she had her second, Roberta. They returned to the United States and West Virginia in 1956. In 1960, Ellie gave birth to their third and final child, Edward Lawrence Justice III. In 1961 the family moved to Northwest Indiana where they would make their permanent home. Ellie went to work for Portage Township Schools, working in the library where she retired from Willowcreek Middle School in 1992. Ellie was an ever active member of the community. She was a member of Theta Gamma Theta service sorority, as well as an active member of the Portage Athletic Boosters for more than 30 years. Ellie is preceded by both of her parents, her beloved husband Ed, and her oldest daughter, Lorrie Cohen (nee Justice). She is survived by two children, Bobbi (John) Wade of Batesville, IN, and Larry (Sheila) Justice; son in law, Bruce Cohen; as well as 10 grandchildren, 15 great grandchildren, 4 great great grandchildren, and nieces, and nephews. Mass of Christian Burial will be held privately. Eleanora will be laid to rest at Graceland Cemetery, Valparaiso, IN. Visitation will be held from 2:00 pm until 5:00 pm on Sunday, January 3, 2021 at Edmonds & Evans Funeral Home Portage Chapel, 6941 Central Ave., Portage, IN 46368. Rosary service will be held at 5:00 pm on Sunday. In lieu of flowers, memorial donations may be made to the Portage Township Food Pantry, 6225 Lute Rd., Portage, IN 46368, or to the Visiting Nurses Association of Northwest Indiana at VNA Foundation, 501 Marquette St., Valparaiso, IN 46383. To leave online condolences to the family please visit www.ee-fh.com.

The family of Eleanora "Ellie" Cecilia Justice created this Life Tributes page to make it easy to share your memories.

Send flowers to the Justice family.