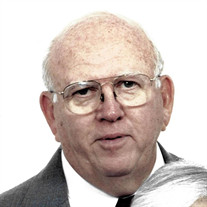 Edward Lawrence Justice Jr., age 89 of Portage, IN departed this life on Wednesday, October 7, 2020 at Golden Living Center in Portage due to natural causes. Ed was born in Steubenville, OH on July 27, 1931 to Edward and Jean Justice (Neel) and graduated from Weirton High School in 1949. He started working for Weirton Steel in 1950. In 1951 he enlisted in the United States Air Force. He served honorably during the Korean War, stationed at Luke Air Force Base, AZ and in Okinawa and Chitose Air Base, Japan. He returned to the United States in 1956 and continued working at National Steel, transferring to the Midwest location in Indiana in 1961. He retired from National Steel (Midwest Steel) in 1992 as a supervisor after 42 years. Ed was active in the community, volunteering time as a Pop Warner Football coach and served as its first president. He was also an active member of the Portage Athletic Boosters for more than 30 years. He was preceded in death by both of his parents; younger brother, Charles Justice; and his oldest daughter, Loretta Jean Cohen. Edward is survived by his beloved wife of 70 years, Eleanora "Ellie" Justice (nee Seigel); two children, Bobbi (John) Wade and Larry (Sheila) Justice; son in law, Bruce Cohen; sister, Sue A. (Curtis) Carlson; ten grandchildren; 17 great grandchildren; five great great grandchildren; and many nieces and nephews. In lieu of flowers, memorial contributions in Ed's name may be made to the Disabled American Veterans (DAV), American Legion, and the Veterans of Foreign Wars (VFW). Visitation will be held on Tuesday, October 13, 2020 from 3:00 pm until 7:00 pm at Edmonds & Evans Funeral Home Portage Chapel, 6941 Central Ave., Portage, IN 46368. Masks and social distancing will be required for all in attendance. Private family funeral services for Edward will be held and he will be laid to rest at Graceland Cemetery, Valparaiso, IN.

Edward Lawrence Justice Jr., age 89 of Portage, IN departed this life on Wednesday, October 7, 2020 at Golden Living Center in Portage due to natural causes. Ed was born in Steubenville, OH on July 27, 1931 to Edward and Jean Justice (Neel)... View Obituary & Service Information

The family of Edward Lawrence Justice Jr created this Life Tributes page to make it easy to share your memories.

Edward Lawrence Justice Jr., age 89 of Portage, IN departed this...

Send flowers to the Justice family.