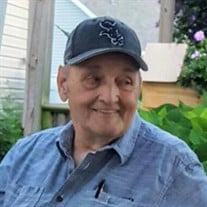 Dick Lee Timmons, 81, of Portage Indiana, passed away on Easter Sunday, April 4th, 2021 after his battle with multiple cancers. He was born July 12, 1939 in Nappanee, Indiana to Vincent and Goldie (Weaver) Timmons. Dick is survived by his loving wife Doris of 36 years; and children Dan (Sandra) Timmons, Darren (Jackie) Timmons, Jonathan Timmons, and Stephanie Timmons; sisters Joan (Ron) Carpenter and Janet (Frank) Ballinger; brother David (Linda) Timmons; grandchildren Ryan (Cristal) Timmons and Sara Timmons; and many nieces and nephews. He was preceded in death by his first wife Peggy and his parents. Dick graduated from Lew Wallace High School in 1957. He started as an apprentice at age 18 for US Steel Gary Works, and retired in 2001 after 44 years of dedicated service. He was very well respected by his coworkers, and maintained a relationship with many even all these years later. Dick was quite the storyteller, drawing listeners in regardless of the topic, and always ending with the perfect punchline. In his younger years he had a look reminiscent of Elvis with his slicked back hair, skinny jeans, and a pack of cigarettes folded up in his t-shirt sleeve. Dick enjoyed camping and fishing with his boys when they were young and later relished road trips and vacations with his family. Some of his favorite destinations were California, Las Vegas, and the Philippines to visit Doris’ family and deliver Balikbayan boxes across the sea. He was an avid White Sox fan, and was rarely seen without his baseball hat on. Dick loved working crossword puzzles, watching jeopardy and classic movies, playing poker, fishing, woodworking, and in recent years built many beautiful birdhouses that decorate their yard. Dick was a headstrong man who was always in charge. His commanding presence caused everyone to naturally fall in line. He maintained control to the very end, leaving this world the same way he lived his life - on his own terms. Dick also had a soft side and loved his family fiercely. Providing for them was always his number one priority. He made so many lives better, and will be greatly missed. Visitation will be held on Thursday, April 8th from 3:30 pm until 6:30 pm at Edmonds & Evans Funeral Home Portage Chapel, 6941 Central Ave, Portage, IN, with Funeral Service immediately following at 6:30 pm at the funeral home. Social distancing will be required, however Dick's family requests that wearing masks be optional for those who wish to do so.

Dick Lee Timmons, 81, of Portage Indiana, passed away on Easter Sunday, April 4th, 2021 after his battle with multiple cancers. He was born July 12, 1939 in Nappanee, Indiana to Vincent and Goldie (Weaver) Timmons. Dick is survived by his... View Obituary & Service Information

The family of Dick Lee Timmons created this Life Tributes page to make it easy to share your memories.

Dick Lee Timmons, 81, of Portage Indiana, passed away on Easter...

Send flowers to the Timmons family.