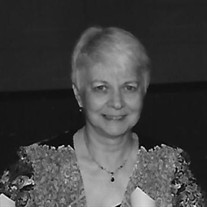 Diane Felicia Anton, age 77, passed away on March 27, 2021. Preceded in death by her dear parents, Ed and Balbina “Boots” (nee Laskowski) Anton, and her beloved friend and partner of 40 years, Sue Miller. She will be greatly missed by her cousins, from the Laskowski, Miterko, and Newlin families, as well as her faithful friends, Jean David, Karen Long, Jean and Eugene Weise, Jim Rajchel, Lori Kirk, Marianne Miterko and Joan Petras Diane graduated from Hammond High School and held a Bachelor and Master’s Degree from Ball State University. Diane started her teaching career as a girl’s physical education/health teacher in 1967 at both Homan and Peifer Schools. She taught and served as Department Chairperson for the Kahler Middle School physical education program and gave many hours to coaching different sports as well as being the scorekeeper for many athletic events. Diane always wanted to be a teacher. She was inspirational and had the ability to make her class not only exciting, but memorable. She truly cared about her students and whether or not they succeeded. Diane’s greatest pleasure was guiding and watching her students improve in their athletic and academic abilities. She undoubtedly had a great influence on many young lives over the years. Diane was a true leader and mentor who was committed to making a difference in lives of her students. In 1995 Diane was awarded Teacher of the Year by District 1 Indiana Middle School Association. Described as a real mover and doer, Diane was an outstanding teacher who spent a lot of time with her students. She was a well-respected and admired member of the Kahler staff and Lake Central School District, retiring after 38 years of dedicated service in 2002. Diane was a life-long member of St. Michael the Archangel Parish, Polish National Catholic Church, taking great joy in supporting church events. She was a long-time member of the St. Cecilia Choir, serving as President for a number of years as well as Vice-Chair- of the Parish Governing Committee in the 1980’s. She enjoyed spending time with friends, attending musicals and plays, gardening, British TV shows, listening to music, watching movies and reading books. Diane also enjoyed extensive travel through most of Europe and the United States including Alaska and Hawaii. Diane bravely fought cancer for five years. She endured surgeries and cancer treatments with courage. Her family would like to thank her medical team at the University of Chicago (particularly Tricia Heinlen), caregivers over the years, Jane ,Lupe, Tracy and Dunes Hospice staff, Jordan, Stephanie and nursing staff at Avalon Springs Health Center and her devoted cousin, Marianne Miterko who helped Diane tremendously in her final years and made her life more comfortable and enjoyable A memorial service will be held at a later date, with Reverend John P. Kowalczyk, Jr. officiating. Interment at Saint Michael the Archangel cemetery, Hammond Indiana. Arrangements entrusted to Edmonds & Evans Funeral & Cremation Services, Chesterton, IN In lieu of flowers, memorials in Diane’s name may be made to Dunes Hospice, 4711 Evans Ave. Valparaiso, IN 46383.

Diane Felicia Anton, age 77, passed away on March 27, 2021. Preceded in death by her dear parents, Ed and Balbina &#8220;Boots&#8221; (nee Laskowski) Anton, and her beloved friend and partner of 40 years, Sue Miller. She will be greatly missed... View Obituary & Service Information

The family of Diane Felicia Anton created this Life Tributes page to make it easy to share your memories.

Send flowers to the Anton family.