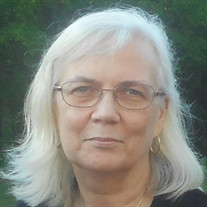 Deborah Anne Gerlach (also known as Dee Gerlach and Debbie Bonner) Dee Gerlach passed away Saturday, September 4, 2021, due to complications from COVID-19. Dee was born September 21, 1951, in Gary, Indiana to Richard M. Gerlach and Virginia Lou Allison. She was a proud 1969 graduate of Lake Central High School in St. John, Indiana. For many years, she was able to successfully juggle being a supportive stay-at-home Mom with being, as she called it, a “professional volunteer” for both the Girl Scouts and Boy Scouts. Some of her proudest volunteer achievements were leading the committee that arranged for girls of many communities in the Calumet Council to attend the 75th Anniversary Parade in Chicago in 1987. Due to this and her other leadership activities, she was awarded the Thanks Badge, one of their highest honors. Many families of Boy Scout Troop 510 in Dyer will remember her efforts as Chief Shopper for their camping trips, even managing steaks one memorable trip. She was active in craft circles, Art in Action, First Aid for Little People, and known for her creative cakes. She eventually took her organizational skills professionally, working more than 25 years for the Ogrodowski family. She retired in 2019 as Executive Assistant at Teck Electric in Dyer. While working with the Ogrodowskis all those years, she became close with the entire family and considered Alicia, Angela, and Corey honorary grandchildren. In retirement, she enjoyed spending time with the family and spoiling her grand dogs Calleigh, Bentley, Little Man, Abigail Lily, and especially her boy Blue. She is survived by her children Angela Bonner (Jeffrey Sanchez), Ric Bonner, and Kat (Mike) Krenz as well as Starr Gibson and Jim Gibson; her grandchildren Nic Krenz (Lacey Guess), Zoe Krenz (Brent Rebeck), and Serena Sanchez; her great-grandchildren Amelia and Rowan; her siblings Richard (Penny) Gerlach, Rick Gerlach, Maxine (Neal) Rice, Grant Gerlach, and Mike (Tammy) Gerlach; her Aunt Anita Allison, Aunt Beth Hanson, and Uncle Grant (Rita) Allison; numerous cousins, nieces, and nephews; and her former husband Richard Bonner. Dee was preceded in death by her parents, her sister Rebecca Gerlach, and her partner Lou Gibson. The family will be holding a Celebration of life on Saturday, September 18, 2021, at Edmonds & Evans Funeral Home, 6941 Central Ave., Portage, Indiana 46368. Visitation will be at 11am with a memorial service at 12 pm. In lieu of flowers, donations may be made to Wounded Warriors or St. Jude Children’s Hospital in her name. Online condolences may be made to the family at www.ee-fh.com.

The family of Deborah Anne Gerlach created this Life Tributes page to make it easy to share your memories.

Send flowers to the Gerlach family.