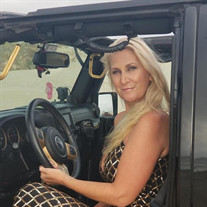 Deanna Carol (Walleske) Shell-Forton, age 49 of Yosemite, KY passed away on Sunday, February 27, 2022 in Yosemite, KY. She was born on April 20, 1972 in Valparaiso, IN to Larry and Diane (Neloff) Walleske. Deanna is survived by her husband, Geo Forton; mother, Diane Jackson; mother-in-law, Vicky Madison; brother, Shane (Stacy) Walleske; sister-in-law, Wendy (Joe) Woodard; daughters, Brittney Shell, Brandie (Patric) Fleeger, Breanna Shell, Chelsey Forton; sons, Andrew (Mary) Forton, Alex (Chana) Forton, Arick (Traci) Forton; grandchildren, Jeffrey Britton, Bentley and Ronnie Fleeger, Brennan Thornton, Evelyn Forton, Penelope Forton, Makenzie Heinz, Maddilyn and Maxwell Forton; nephew, Sloan; niece, Saige. She was preceded in death by father, Larry Walleske; first husband, Ronnie Shell; mother-in-law, Pat Guzman; step-father, Bill Jackson. Deanna loved the color purple, 80's hair, music and fashion. She had an affinity for writing stories and poems. Some of her favorite hobbies included long jeep rides with the top down and playing with her beloved mini-pigs. As a teen she met her first husband, Ronnie and began their whirl wind romance. Later in their lives they had their first daughter, Brittney; soon to be followed by Brandie and Breanna. Not long after Breanna was born they moved to Huntington Beach, California, where she fell in love with the ocean. In 2008 Deanna tragically lost Ronnie and after a hard healing process she met her second husband, Geo. Their dynamic love story lead to her obtaining her fourth daughter, Chelsey. Deanna and Geo went on many adventures, traveling all over the country before settling down on their land in Kentucky, where they co-founded Echo Valley Farms. Deanna was a beloved "Gramdee" and loved her grandchildren more than anything in the world. She was a beautiful human with an infectious laugh. She will live on in all of our hearts forever. A Funeral Ceremony will be held on Tuesday, March 8, 2022 at 4:00 pm at Edmonds & Evans Funeral Home Portage Chapel, 6941 Central Avenue, Portage, IN 46368 with Joseph Neloff officiating. A visitation will be from 2:00 pm until the time of service at 4:00 pm at the funeral home. Online condolences may be made to the family at www.ee-fh.com.

Deanna Carol (Walleske) Shell-Forton, age 49 of Yosemite, KY passed away on Sunday, February 27, 2022 in Yosemite, KY. She was born on April 20, 1972 in Valparaiso, IN to Larry and Diane (Neloff) Walleske. Deanna is survived by her husband,... View Obituary & Service Information

The family of Deanna Shell-Forton created this Life Tributes page to make it easy to share your memories.

Send flowers to the Shell-Forton family.