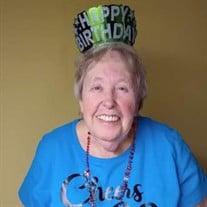 On Thursday, January 7th, 2021, Darlene Maloney, loving mother, grandmother and great-grandmother, passed away at the age of 80. Darlene was born April 3, 1940 in Porter, IN to Doris (Tharp) and Schuyler Swisher. On October 4, 1973, she married the love of her life, James Maloney. They raised five daughters and one son. Darlene led a life of service. She began serving her community at a young age as a Girl Scout, and then she worked and volunteered at the Gary Crisis Center helping in suicide and drug intervention. She was an active PTA member at the local, state, and national level, even serving as the President of the Indiana State PTA. Additionally, she served the church throughout her life as a choir member, choir director, youth group leader, church secretary, and a church vestry member. Her many talents include her seamstress skills, her world-class cooking, and her infamous Irish coffees & hot toddies. Darlene was also a great story teller. Her favorite stories to tell were about the family history and traditions to the children, grandchildren, and great-grandchildren, whom she greatly adored. Before her husband, Jim (James), passed away, they spent many blissful afternoons exploring every inch of Notre Dame’s campus, photographing and documenting their favorite place on Earth. Cheers to 80 years! Darlene was preceded in death by her husband, James Patrick Henry Maloney. She is survived by her six children: Peggy (Manny) Guardiola, Denise (Ron) Wilusz, Sean (Jessica) Maloney, Shannon (Chris) Chavis, Erin (Brian) Sheely, and Kathleen (Michael) Schwager. She is also survived by her brother Carl Edward Swisher and her 13 grandchildren: Kian, Michael, Brianne, Desmyn, Martin, Aiden, Bailey, Molly, Bradlee, Caitlin, Seth, Claire, and Schuyler; and four great-grandchildren Finnegan, Oliver, Delaney, and Miles; and numerous Tharp cousins. Due to COVID restrictions, all in-person services will be private. The funeral service will be streamed via the provided link on Tuesday, January 12, 2021, at 11am CST. https://youtube.com/channel/UCH0wgkTeOpUTlgqnB4jI0LA In lieu of flowers, the family requests that donations be made to the Davis Phinney Parkinson’s Foundation. Make A Gift - Davis Phinney Foundation

On Thursday, January 7th, 2021, Darlene Maloney, loving mother, grandmother and great-grandmother, passed away at the age of 80. Darlene was born April 3, 1940 in Porter, IN to Doris (Tharp) and Schuyler Swisher. On October 4, 1973, she married... View Obituary & Service Information

The family of Darlene Maloney created this Life Tributes page to make it easy to share your memories.

Send flowers to the Maloney family.