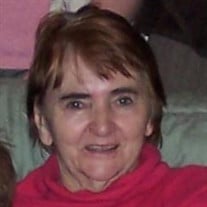 Christa Rainford (Koch) was born in Weischlitz, Germany on September 4, 1935 and passed away on March 15, 2021 in Denton, Texas at the age of 85. Christa is pre-deceased by her father, Max Paul Koch and her mother Else Erna (Günther) Koch, her siblings; Gerhardt (Christa) Günther, Wolfgang Koch, Karl (Ursula) Koch, Elisabet (Lothar), Ilse (Rolf) and her brother-in-law Fritz Frank. Christa leaves behind two sisters: Ursula Ryan, and Erika Frank. Also left behind are children Clyde (Kim), Audrey, Scott (Shauna), and Paul (Shelley), 9 grandchildren and 7 Great grandchildren. Christa, who dared when other might not, left East Germany in the mid-1950s. Christa was the oldest of 8 children and sought to find a new world several years before the iron curtain was finalized between East and West Germany. While in West Germany, she met and married Delmar Joseph Rainford on October 4, 1959. They divorced in 1979. Christa raised her children and afterwards worked as a bus driver assistant for the Valparaiso school system. Christa later worked as an in-home caregiver for the elderly. Toward the last portion of her life, she spent over 8 years at Cottonwood Nursing Home. The caregivers at Cottonwood speak highly of Christa’s smile, attitude and optimism. We will miss her immense presence when she entered a room and her method of being able to talk to anyone. She never met a stranger. In the later years, Christa always spoke of going back to Indiana to pick apples and blueberries. Given Christa’s bout with polio at the age of 7, she always had a special spot in her heart for the special and/or disadvantaged children of the world. Christa would lend a hand to the point of putting herself in harm’s way. Memorial Services will be held on April 10, 2021 at 10:30 AM at Edmonds and Evans Funeral Home, 517 Broadway, Chesterton, Indiana 46304. The doors will open 9:30 AM to visit prior to the memorial service. In lieu of flowers, donations may be made to Scottish Rite for Children 2222 Welborn Street, Dallas, TX 75219. Those she leaves behind love her and will miss her forever.

Christa Rainford (Koch) was born in Weischlitz, Germany on September 4, 1935 and passed away on March 15, 2021 in Denton, Texas at the age of 85. Christa is pre-deceased by her father, Max Paul Koch and her mother Else Erna (Günther) Koch,... View Obituary & Service Information

The family of Christa Rainford created this Life Tributes page to make it easy to share your memories.

Christa Rainford (Koch) was born in Weischlitz, Germany on September...

Send flowers to the Rainford family.