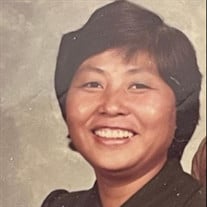 Chong Sun “Sunny” Murray, 75, passed away peacefully at her home in Chesterton, Indiana on August 28, 2021. She was born on September 19, 1945 in Kwangsan-gun, Chonnam, South Korea, to Ki Chol O. and Man Yop Kim. Chong Sun Murray had one brother and one sister. Sunny is survived by her husband, Alan Murray; daughter, Alison Murray; son, John (Jessica) Murray; brother-in-law, Fred (Linda) Murray; niece Haley (Ben) Wiesenfeld; nephew Colin Murray; and best friend, Yong Cha (Edward) O’Brien. She was preceded in death by mother, Man Yop Kim and her father, Ki Chol O. along with her sister. Sunny married Alan Richard Murray on March 11, 1969 in South Korea, and arrived in the U.S. in August 1969. From 1969 to 1979, the family lived in the Cleveland, Ohio area before moving to Princeton, Illinois. Sunny was employed with Jostens Company for 14 years in Princeton making recognition awards and Class rings including the 1985 Chicago Bears Super Bowl rings. In 1994, Al and Sunny moved to Chesterton, Indiana where Sunny had adopted her beloved dog, Mr. Crackers. Sunny enjoyed tending to her vegetable garden by canning and pickling her freshly picked cucumbers, tomatoes, and peppers. She enjoyed cooking and preparing homemade kimchi for all the neighbors to enjoy. Neighbors will most remember Sunny taking her walks around the block, sharing fun friendly conversation, and of course, sipping on her hot coffee in the mid afternoon. Sunny may have been tiny in stature but she certainly had a big bold personality that was larger than life. A private service for Sunny Murray will be held on Sunday, September 19, 2021 at 2pm in Chesterton, Indiana.

The family of Chong Sun "Sunny" Murray created this Life Tributes page to make it easy to share your memories.

Chong Sun “Sunny” Murray, 75, passed away peacefully at her home...

Send flowers to the Murray family.