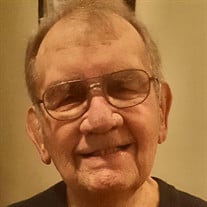 Charles Nolan "Yogi" Temple, age 87 of Portage, IN formerly of Chesterton, IN passed away peacefully at home on Friday, October 16, 2020. He was born in Eldorado, IL on February 5, 1933 to William I. and Thelma A. (Smith) Temple. Charles is survived by his sons, Brian (Rose) Temple of Fillmore, IN, Scott Temple of Largo, FL and Ron (Joan) Temple of Morristown, IN; daughters, Kathy (Mike) Demkowicz of Valparaiso, IN and Sharon (John) Sherrick of Chesterton, IN; sister-in-law, Betty Temple of Cedar Lake, IN; 8 grandchildren and 9 great grandchildren. He was preceded in death by his parents; wife, Thelma L. (Simmons) Temple and brother, Larry Temple. Charles was a 1951 graduate of Merrillville High School and was an All Star Football Player. He was a member of the United States Navy and served during the Korean War. Charles was married to his wife Thelma for over 63 years and retired from Inland Steel after 30 plus years. He was a member of The Chesterton Lions Club and was Vision Screening Chairman from 2003-2017. He received numerous awards during that time for his service and dedication. Charles enjoyed photography, gardening, playing his ukulele and was an avid marathon runner having competed in many marathons all over the country. He was a member of American Legion Post 170 and Save The Tunes Musical Group and he was a founding member of The Just For Fun Strummers. He played locally with the Golden Fingers. Charles was also a former Scoutmaster for Troop 221 in Hammond, IN. Charles was a loving husband, father, brother, grandfather, great-grandfather and uncle and will be deeply missed. Funeral Services will be held on Thursday, October 22, 2020 at 11:00 am at Edmonds & Evans Funeral Home, 517 Broadway, Chesterton, IN 46304 with Pastor Bob Neuman officiating. Burial to take place at Chesterton Cemetery. Visitation will be held on Wednesday, October 21, 2020 from 3:00 pm until 7:00 pm at the funeral home. Donations in Charles's honor may be made to either The Chesterton Lions Club or D.A.V. Disabled American Veterans Association. Masks are required for everyone in attendance. Online condolences to the family may be made at ee-fh.com.

Charles Nolan "Yogi" Temple, age 87 of Portage, IN formerly of Chesterton, IN passed away peacefully at home on Friday, October 16, 2020. He was born in Eldorado, IL on February 5, 1933 to William I. and Thelma A. (Smith) Temple. Charles is... View Obituary & Service Information

The family of Charles N. "Yogi" Temple created this Life Tributes page to make it easy to share your memories.

Charles Nolan &quot;Yogi&quot; Temple, age 87 of Portage, IN formerly of...

Send flowers to the Temple family.