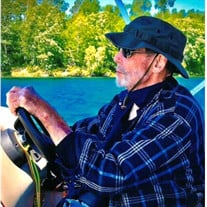 Charles "Opa" Lynwood Fletcher went fishing in heaven, Wednesday morning, April 14, 2021 in the home he built with his loving wife, daughters and grandchildren by his side. Charles was preceded in death by his parents, George and Loyola Fletcher; his brothers, George and Robert Fletcher, and sister-in-law, Patty Fletcher. He is survived by his wife, Mary (Wiseman) Fletcher; his daughters, Ann (Eric) Dorris of Crown Point, and Tracy (Dale) Huyvaert of Valparaiso; his loving grandchildren, Rachael, Will, Skarlette; his sister, Alice (Pete) Jensen of Fredericksburg, TX., and his sister-in-law, Joan Fletcher of Valparaiso. Charles was born in Gary, Indiana on July 22, 1944 and graduated from Liberty High School in 1962. Charles served in the National Guard for 6 years. He worked at Midwest Steel, retiring after 38 years, and also worked at Ivy Tech where he retired after 11 years. Charles married the love of his life, Mary "Juanita", on July 14, 1967. They met at the Port Drive-In where she was a carhop. He loved to travel especially for his annual fishing trips with his family at Trout Lake, MN. and was always on the lookout to catch "Big Moe". He was a hard worker and generous man who was always there to help those in need. He showed his love to all through food and enjoyed spending time with his grandchildren because he said it "kept him young". Even after his passing, his memory will live on through every meal, family gathering, and trip that his family partakes in. Visitation will be Sunday, April 18, 2021 at Edmonds & Evans Funeral Home, 517 Broadway, Chesterton, IN 46304 from 1:00 pm until 5:00 pm led by Reverend Dean Christanson. Service will be held at 5:00 pm. The family wishes to express their gratitude to the VNA of NWI and the University of Chicago for all of your support and kindness.

Charles "Opa" Lynwood Fletcher went fishing in heaven, Wednesday morning, April 14, 2021 in the home he built with his loving wife, daughters and grandchildren by his side. Charles was preceded in death by his parents, George and Loyola Fletcher;... View Obituary & Service Information

The family of Charles "Opa" Lynwood Fletcher created this Life Tributes page to make it easy to share your memories.

Send flowers to the Fletcher family.