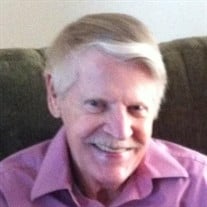 Charles Frederick Krostag passed away peacefully on February 18, 2022 surrounded by his family. He was 79. Charles was born on April 14, 1942 in Marshfield, WI. He was the second son of seven children born to Erna (Hagen) and Arnold Krostag. On May 1st, 1965 he married Julia (Hoeser) Krostag of Neillsville, WI. He joined the Marine Corps during the Vietnam era and attained the rank of Corporal. He served three years at Camp Pendleton in San Diego, CA. He graduated from the University of Wisconsin-Parkside with a BA in Business Management in 1973. He had a very successful career in business management. He started his supervisory career at a small bakery (Karu's) in Marshfield. The family moved to Racine, WI a few years later where he secured a job at JI Case as a Foreman. In 1978, the family moved to Portage, IN. He secured a job as a Superintendent at Pullman Standard. He also worked for Union Tank as a Tank Inspector and at Juneburg Forge as a Purchasing Agent. Charles then worked as a Supervisor at Kaiser Aluminum, National Can, American National Can and Rexam before retiring in 1999. He briefly came out of retirement and worked as a Supervisor at LTV Steel until 2001. Charles was a lifelong Catholic and a member of Nativity of Our Savior Church for 44 years. He was an usher occasionally and helped paint Nativity School during an expansion project. Both his sons attended Nativity School. Charles was a huge Green Bay Packers fan and loved old westerns and homemade pizza. He was a skilled accordion player and loved dancing, bowling and golf. He was also an avid gardener. Charles is survived by his children, Michele McLaughlin, Marsha Profitt, Charles Krostag, Michael Krostag, Melanie Haas and Stephanie Voegerl; grandchildren: Bennett Profitt, Matthew Krostag, Andrew Krostag, Lucas and Ava Haas, Avery and Bryce Voegerl, and his beloved in-laws, William McLaughlin, Scott Profitt, Laura Krostag, Ryan Haas and Branden Voegerl. Charles is also survived by his loving wife of 56 years, Julia, his brother, Arnold Krostag; sisters, Donna Schultz, JoAnne Clausen and Yvonne Tenke, scores of nieces, nephews and cousins. He was preceded in death by his parents, Arnold and Erna Krostag and his sisters, Carol and Betty. He will be greatly missed by all. Mass of Christian Burial will be held on Monday, February 28, 2022 at 11:00 am at Nativity of Our Savior Catholic Church, 2949 Willowcreek Rd., Portage, IN 46368 with Father Kevin McCarthy officiating. Inurnment to follow at Heritage Cemetery. Memorial Visitation will be held on Monday, February 28, 2022 from 10:00 am until time of Mass at 11:00 am at the church. In lieu of flowers, donations may be made to: Wounded Warriors Project, P.O. Box 758516 Topeka, KS 66675-8516. Online condolences may be made to the family at www.ee-fh.com.

Charles Frederick Krostag passed away peacefully on February 18, 2022 surrounded by his family. He was 79. Charles was born on April 14, 1942 in Marshfield, WI. He was the second son of seven children born to Erna (Hagen) and Arnold Krostag.... View Obituary & Service Information

The family of Charles Frederick Krostag created this Life Tributes page to make it easy to share your memories.

Send flowers to the Krostag family.