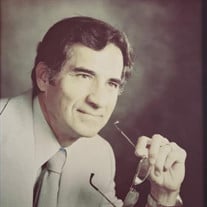 Dr. Carlos Alberto Céspedes Carlos Alberto Céspedes passed away peacefully on June 13, 2021 at the age of 91, surrounded by his loving wife and family. Carlos was born to Beltrán and Elena Céspedes in Sullana, Perú, in 1930 and grew up in Máncora on the Pacific Ocean. He graduated from Universidad Nacional de San Marcos in 1955 with a degree in medicine and came to Chicago, IL, in 1958. With a lifelong enthusiasm for medicine and a devotion to helping others, “Doc” practiced as a general surgeon at St. Margaret Mercy South and Community Hospital. He also saw patients at his office in Griffith, IN, until his retirement in 1996. After overcoming cancer, he volunteered his time at the Catherine McAuley Clinic for the medically underserved, until he was in his eighties. Carlos married Edie (nee Ferguson) on October 1, 1960, and together they raised six children. A true gentleman and patriarch, he led his children by example. Time off was spent enjoying the outdoors with his family and playing and watching tennis. Carlos is survived by his beloved wife of 60 years, Edie; his children, Martha (Mark) Voorhees of Bonita Springs, FL, Carlos (Sonya) Céspedes of Key West, FL, José (Sally) Céspedes of Valparaiso, IN, David (Lisa) Céspedes of Wheaton, IL, Robert (Patty) Céspedes of Valparaiso, IN, and Edie N. (Joshua) Orwig of Janesville, WI; his 17 grandchildren; and his sister, Mother Superior Antonieta Céspedes, Canonesa de la Cruz. He was a proud grandpa (Buba) to Robert and Brian; Sam and Alex; Nicole, Mary, and José M.; Hannah, Rachel, William, Megan, and James; Patita, Fiorella, Anissa, and Diana; and Mati. He was preceded in death by his parents, Beltrán and Elena; his brother, José Céspedes; and his sister, Berta Senekowitsch. Visitation to be held Sunday, June 20, 2021, 2:00 pm - 6:00 pm at Edmonds and Evans Funeral Homes, 517 Broadway, Chesterton, IN. A funeral Mass will be held Monday, June 21, 2021, at 10:00 a.m. at St. Teresa of Avila Catholic Church, 1511 Laporte Ave, Valparaiso, IN. To leave online condolences to the family please visit www.ee-fh.com.

The family of Dr. Carlos Alberto Cespedes created this Life Tributes page to make it easy to share your memories.

Send flowers to the Cespedes family.