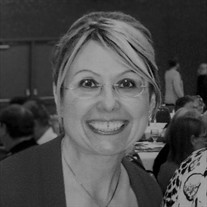 Bridget Kathleen Glancy Cletcher was born September 30, 1959 in Gary, Indiana growing up with two brothers and a sister, Dean, Sean and Janice, she enjoyed spending time with her father; going fishing, watching John Wayne and Jimmy Stewart movies as well. She enjoyed Musicals, Double Dutch Rope, Dancing, and a Variety of Music. Moving to Portage She attended Portage Highschool, where she played the Clarinet in band, she also participated in Campus Life. Graduating in 1978 she worked at various jobs such as U.S. Steel, and was a visiting Nurse for a time. In 1985 at a camp retreat she met Terry Cletcher; Married in 1986 She had her First child that September Shana, Followed by a Sister two years after, Alisha. Homeschooling the girls and being active within the family’s church was highly important to her as she became a Christian at 17 in 1976. In 2002 Bridget began working at Opportunity Enterprises and stayed there for 18 years working in various departments. Continuing to assist her career she completed two years of college in American Sign Language, being the first in her family to attend college. Bridget had a passion starting in 1989 for Irish Dancing, continuing as she taught her daughters how to dance and did performances to nursing homes all throughout northwest Indiana. She also learned to play the bagpipes which took her three to four years to learn. Being in several Bagpipe bands, she ended her time as a member of Culver Pipes and Drums, with a true passion and brilliance for her musical talents, enjoying competing and even participating with her granddaughters, who she helped raise Laycee and Kaitlyn Dombrowski. In 2016 she achieved her lifelong dream going on a trip to Scotland and Ireland, a true joy of excitement. As an active member of her Church she taught children for more than 30 years. She loved Choir, Woman’s group and was an active member of the local Legion Post502. Ballroom dancing, different aera attire dress, costumes, and bringing joy to all was some of her favorite hobbies. Bridget was proceeded in death by her husband Terry on July 22, 2018 after 32 years of marriage, and her sister, Janice Ursta. She is survived by two daughters, Shana Cletcher and Alisha Plasterer, Son in law, Michael Plasterer and four grandchildren, Laycee, Kaitlyn, Evan, and Thomas. Funeral Service will be held on Friday, November 20, 2020 at 5:00 pm at Liberty Bible Church, 824 N. Calumet Avenue, Chesterton, IN 46304. A visitation will be held at the church from 3:00 pm until the time of service at 5:00 pm for social distancing purposes. The family would like to invite everyone to a gathering after the service with light refreshments. Online condolences may be made to www.ee-fh.com.

The family of Bridget Kathleen Cletcher created this Life Tributes page to make it easy to share your memories.

Send flowers to the Cletcher family.