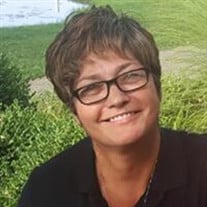 Brenda S. Kleihege, the publisher of The Chronicle in Valparaiso, Indiana and longtime supporter of many charitable organizations throughout Northwest Indiana, died on February 28 while surrounded by family and friends, in a hospital in Detroit, Michigan. She was 59. The cause was complications brought on by the Covid Virus. Brenda was fully vaccinated and boosted. Brenda’s life and career always reflected her generosity, her discipline to act with kindness and to share with others while not expecting to receive anything in return. In the early 1990s, she was instrumental in founding The Duneland Exchange Club, an organization that continues today to address fundamental issues of child abuse, homelessness and other social ills. In addition, Brenda and her husband, Patrick Kleihege, consistently donated to charities, volunteered time and raised funds for important causes. Brenda owned and operated Great Lakes Publishing, a graphic design and advertising firm, from 1998 until 2001. She then began her publishing career under the tutelage of her father, Pete Costello, who owned and operated several newspapers in the area. Brenda took over the reins of The Chronicle and chose to narrow the focus of the paper to report "the good news” of communities in Lake, Porter and LaPorte counties. Brenda felt that if someone wanted to read the ugliness of a person or a place, there were ample opportunities elsewhere. Instead, she wanted to focus on stories about people and events that made people believe in better. This generosity of spirit did not stop at The Chronicle’s front door or in the public realm of charities and causes. Countless times Brenda made those small yet important contributions to individuals, be it new shoes, a winter coat, or help with unexpected bills. She was also there for people grieving or in pain. Note that the boldness that allowed her to tackle such large and small scale issues also presented itself in her daily expression. Her standards for herself were also hoped for in those around her. And those expectations were tempered with understanding. Brenda’s contributions to others continue beyond her final day. As an organ donor, Brenda has allowed others to live a full and complete life. Brenda Sue Costello Kleihege is survived by her devoted husband, Patrick Kleihege; their son Nicholas; his partner, Brittany Gutierrez; most loved granddaughter, Anastasia; and stepdaughter, Emma Glass; her husband Austin; and grandchildren, Braxton and Blakley. Brenda is also survived by her brother, Mike Shank; her sister Jodi Betterton, and Nancy Martin; niece Megan DeGarmo; and children Jaxon, Jayden, Rae Lynn, and Aubree. She was born to Nancy and Pete Costello and was sister to the late Steve Costello, Beverly Costello, and Jeanie Donavan. Brenda is surrounded by an extended family and wonderful friends who so deeply love her. A Gathering of Friends will be held by the family at Edmonds and Evans Funeral Home, 517 Broadway, Chesterton, IN 46304, on Wednesday, March 23rd from 4:00-8:00 p.m. In lieu of flowers please make a donation to the Duneland Exchange Club, P.O. Box 2451, Chesterton, IN 46304.

Brenda S. Kleihege, the publisher of The Chronicle in Valparaiso, Indiana and longtime supporter of many charitable organizations throughout Northwest Indiana, died on February 28 while surrounded by family and friends, in a hospital in Detroit,... View Obituary & Service Information

The family of Brenda Sue Kleihege created this Life Tributes page to make it easy to share your memories.

Brenda S. Kleihege, the publisher of The Chronicle in Valparaiso,...

Send flowers to the Kleihege family.