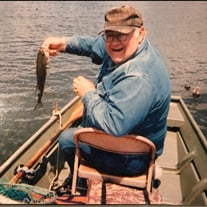 On Sunday, May 16, 2021, Andrew John "Pratsch" Pratscher, devoted father, grandfather, and friend, passed away surrounded by his family and loved ones at the age of 72. Andy was born on March 24, 1949, in Chicago, IL, to Adolph J. Pratscher and Patricia Blake. He graduated from Thornridge High School in 1967, where he had excelled as an athlete in football, diving, weightlifting, and track, in which he set the discus record his freshman year. He later studied Mathematics at Northern Illinois University. On August 21, 1971, he married his high school sweetheart, Linda Ann Cox, and together they raised their three beautiful children, Michael, April, and Valerie. He went on to start his own roofing company before joining Amoco as a metals mechanic in “the Shop”, retiring after 30 years as a distinguished welder, the welding school instructor, and the recipient of multiple inventor awards. In his early years Andy had a passion for karate, being a lifeguard, playing pool, and riding his motorcycle with Linda. Once his children were old enough, fishing with his family and friends became his most beloved pastime, with each outing being a friendly competition to see who caught the first, the most, and the biggest fish. He eventually combined his love of fishing and knack for invention to create the Speedhook, and together with his long-time friend Mike Grynecki, founded Speedhook Specialists, Inc. He represented Speedhook on the Oprah Winfrey Show and The Midwest Angler with Jack DeBord, and the Speedhook is included in military survival kits around the world. Later in life Andy slowed down a bit and absolutely loved watching old movies and TV shows. He will be remembered for his selflessness, wit, and his gift for storytelling. Andrew is survived by the mother of his children, Linda (Cox) Pratscher; his son, Michael (Laura) Pratscher; daughters, April (Brandon Lehew) Pratscher, Valerie (Stephanie Taylor) Pratscher; granddaughters, Ava Cristina Colon, Olivia Lynn Riffle, Audrey Claire Pratscher; nieces, Nicole Gulsby, Kelly Baldwin-Soal. He was preceded in death by his father, Adolph Pratscher; mother, Patricia Blake; sister, Lois Ann Lavender. Funeral Ceremony will be held on Friday, May 21, 2021 at 1:00 pm at Edmonds & Evans Funeral Home Portage Chapel, 6941 Central Avenue, Portage, IN 46368. Visitation will be from 11:00 am until the time of service at 1:00 pm at the funeral home. Memorial may be made to the organization of the donor's choice.

On Sunday, May 16, 2021, Andrew John "Pratsch" Pratscher, devoted father, grandfather, and friend, passed away surrounded by his family and loved ones at the age of 72. Andy was born on March 24, 1949, in Chicago, IL, to Adolph J. Pratscher... View Obituary & Service Information

The family of Andrew John Pratscher created this Life Tributes page to make it easy to share your memories.

Send flowers to the Pratscher family.